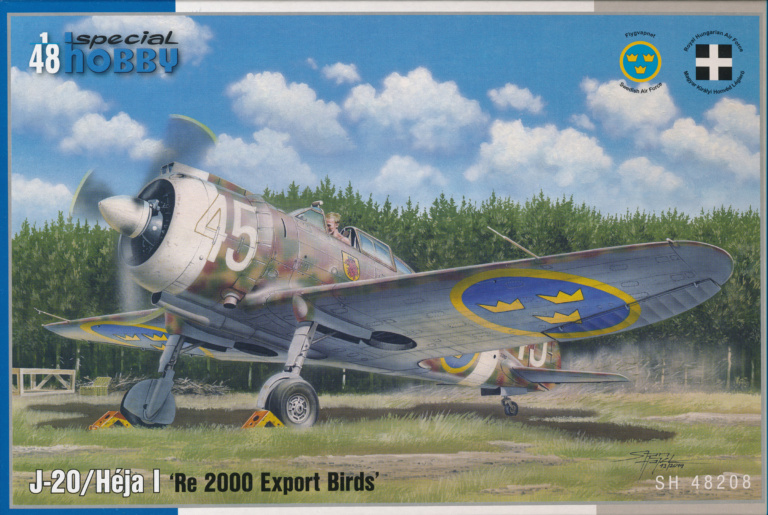 Special Hobby announced this kit a while back which came as welcome news. Excluding a sad kit form Směr it has been hard to find a kit of the Reggiane Re.2000 in 1/48 (the last new kit was released almost 20 years ago). Interestingly it has first been released in an Export Birds release (which is nice for us in Sweden) but it will soon be followed by an Italian version (Reggiane Re 2000 Serie I). Now this kit has hit the shelves and I received my kit the other day.

The box art depicts a Swedish J 20 warming up an an airfield. When opening the box you will find four grey spruces, one clear spruce, a decal sheet and an instruction booklet printed on glossy paper in colour.

Spruce A holds the fuselage halves, the stabilisers and the engine cowl. The parts are crisp and good in detail. Some might find the panel lines a bit shallow, on the other hand there might be others that likes this.The inside of the fuselage is clean as the cockpit is detailed separately.

Spruce B holds the main wings. Now, I read somewhere that this spruce actually origins from the old Classic Airframes kit and is not part of the new tooling. This would explain the molding flashes which are apparent on this spruce and not on the others. It's not horrible though and is easily fixed with a scalpel and sanding. The attachments to the front of the wings might prove a challenge though. Don't do the wings in a hurry.

Sprue C is the main spruce contains most parts. It's nice to note that the radial engine is fully represented and not just a front part as in some cheaper/older kits. The propeller have separate blades and I see that there is no guiding to place them in the right angle which also needs some care when assembling. The cockpit is built as a tub placed into the fuselage. The walls are reasonably thin so the top edge of the cockpit will not be very thick.

Spruce D holds the last detailing parts including the front and back of the cockpit, spur wheel strut etc. The way it's molded signals that the might be a later release of the kit (another version) with more parts.

Lastly is the clear spruce. It's nice to note that the hood is made in three parts making it easy to display the kit with open cockpit if you want.

The instructions are printed on glossy paper in colour. Starting off with a history of the Reggiane Re.2000 (J 20/Héja I) in Czech and English on the front. A list of colours needed for the kit is on page 3 with references to Gunze/Mr Color colour codes.

The instructions are crammed and not separated with lines but there are step tags to follow. Not for the impatient one, but then again if your impatient then you should not be building plastic models.

The cockpit is quite detailed with many parts. As previously mentioned it's built as a tub to be built into the fuselage. It has all potential to look good, albeit most of it will be hard to see once you've closed the fuselage. There is no seat belts for the pilots seat, neither molded or as decals. You have to do your own.

The rest is quite straight forward. Note worthy is that the landing gears (with exception of the spur wheel) and the propeller is easily mounted after painting the camouflage which makes things easier. Also nice is that they made the end part of the engine cowl, where the adjustable ventilators is, thinner. This is something that the kit makers usually miss. The hard core modeller cut these away and replace them. But here I think it will suffice with making small cuts in the panel lines.

The decals looks good. The real test will of course come when they're applied. The kit comes with a generous choice of four different versions to chose from. Two Swedish and two Hungarian. Maybe the Hungarian versions would be more interesting to build as they saw action in the Soviet Union (against the Russians) and have named pilots flying them (one being István Horthy, the son of the Hungarian prime minister, who was killed in this machine). But for us that like to build planes from the Swedish Air Force it's nice to finally be able to do a good J 20.

With a little note about the old wings this is looks like a good kit from Special Hobby. Actually a bit above the standard that I've come to expect from them as they usually do small series of planes a bit off the beaten track. Cudos to them for making this kit covering, what I've perceived as, a missing link in kits from the SAF.