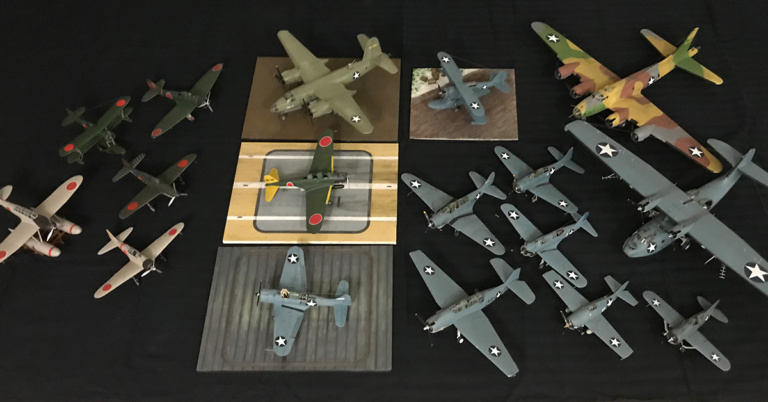 Finally done! I've now offically concluded my 75 years after the Battle of Midway project. It took a little bit more than  one and a half year to do., including an involuntary pause of several months due to an intervening move. As you can see in the posts it grew in volume under the way but now I believe I've covered every aircraft type that participated in the battle. Even both types of the Dauntless, the SBD-2 and SBD-3. In the process I've also learned a great deal about the history, reading a multitude of articles and books on the subject in my hunt for specific planes to build. 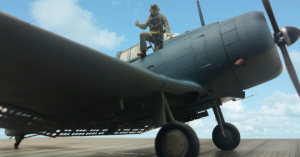 I spent an extra effort on the last kit. It was needed. To compensate for an old kit with a poor representation of the characteristic Dauntlesses air-brakes Hasegawa had included etched metal parts which added some levels of skill requirements. I also bought a large extra detailing set from Eduard to further enhance the kit adding more complexity. Another first for me was to exchange the canopy parts for a much thinner vacuum formed canopy. This was not an easy task I can tell you. To cut out the canopy parts turned out to be a real challenge. For once I also added a pilot. A resin figure to represent pilot Best climbing out of the cockpit after one of his successful raids that day, the 4 June 1942. As you can see on the left I also took a picture of the kit and edited in a sky in the background to create a suitable end representation of the project. 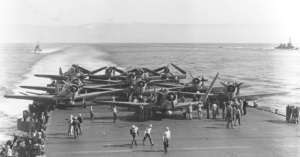 To close this project I've created project pages on this website writing my take on the historical event with one page for each kit I've built. On each page I've written the story of the actual plane combining it with relevant pictures and a gallery of pictures of the model itself. My plan is to create pages for each project I do and in that way also learn more of the history around my kits. It adds a pleasant dimension to my plastic modeling.

You can head over to the project pages here: The Battle Of Midway 75 years

I'm just finishing an in between kit, a Spitfire Mk.IX. It'e the plane of Johnny E Jonson, a Canadian ace who fought in the RAF. In my youth I once sent a letter to him when he had written in the comic paper Pilot. He actually replied in an hand written letter which impressed me much. The letter is long since gone but I felt I owed him this homage.