Finally I can resume my Battle Of Midway project. After almost five months in boxes all my modelling stuff is unpacked. 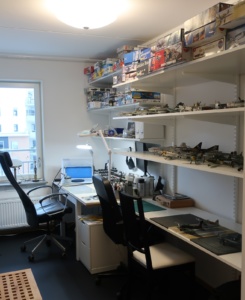 This paragraph might be a bit off topic but there's an update on the project below. In my new apartment I've set aside a room entirely for my hobby. It still turned out that I'll probably will need more shelves soon. Still it's an improvement. The desk is larger than my previous one and I added another module to my paint stand so now it has room for all the bottles (for now any ways).

I installed a black linoleum carpet on top of the oak parquet. In part for protection but also to fight the horrible carpet monster where all small plastic details disappear.

A new spray booth for when I use the air brush. So now I hope that there'll be a bit cleaner air and less paint dust. This far the kit has proven to be better than expected.

On the other wall I have a book shelf with all the reference literature. 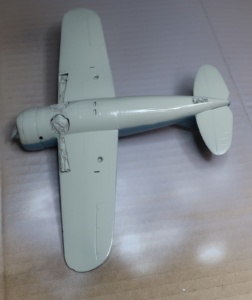 I've picked up where I left and am still working simultaneously with the Brewster F2A-3 Buffalo and the Grumman TBD-1 Avenger.

The paint is on the Buffalo and I have to pick the individual for the markings. Gary Asher has an excellent Flickr stream with most of the Midway Buffalo's and accompanying pilots accounts from the fighting at https://www.flickr.com/photos/13935339@N05/with/6950100846/. It will be hard to settle on any one of them. I hope to get done with this one soon as this is not a very good model to work with as the kit is a bit dated.

The Avenger from Hobby Boss on the other hand is more enjoyable. It's a good kit full of details. It's also sold as a Battle Of Midway kit with markings of the only Avenger to come back from the attack on the Japanese fleet. The only snag is that it the kit is a Grumman TBD-1C Avenger which is a later model. Even the box art depicts the plane with rockets which was not used until later in the war. As far as I've concluded there is only minor alterations to be made though. First is to omit the rockets and file down the small panels on the wings and fill the holes. You also need to omit the radar antennas (also depicted on the box) and fill those holes in the wings. The cut off the wing mounted guns and fill the gun holes under the wings. After these small changes you are closer to the TBD-1 that flew at midway.

These two done I'll start up two new ones. It will probably be the Aichi E13A1 ‘Jake’, another really old kit, and the fateful Douglas TBD-1 Devastator. Both these kits were a bit hard to hunt down. The Devastator from Great Wall Hobby I found on Ebay located in China. Unfortunately the local post service failed the first delivery and sent it back. Fortunately I managed to communicate with the seller and he (she?) resent the model.

For a long time I thought there were no kits of the 'Jake' in scale 1:48 and had given up on it. Then one of my internet surfings paid off and I found an old model made by a company called Nichimo. And lo and behold there was a few available at Ebay. I order one from Germany and it arrived promptly. It's a real simple kit without any cockpit interior but still it is a 'Jake'. I will have to scavenge some old decals but at least I have two individuals to chose from thanks to this page: http://www.printscale.org/product_547.html