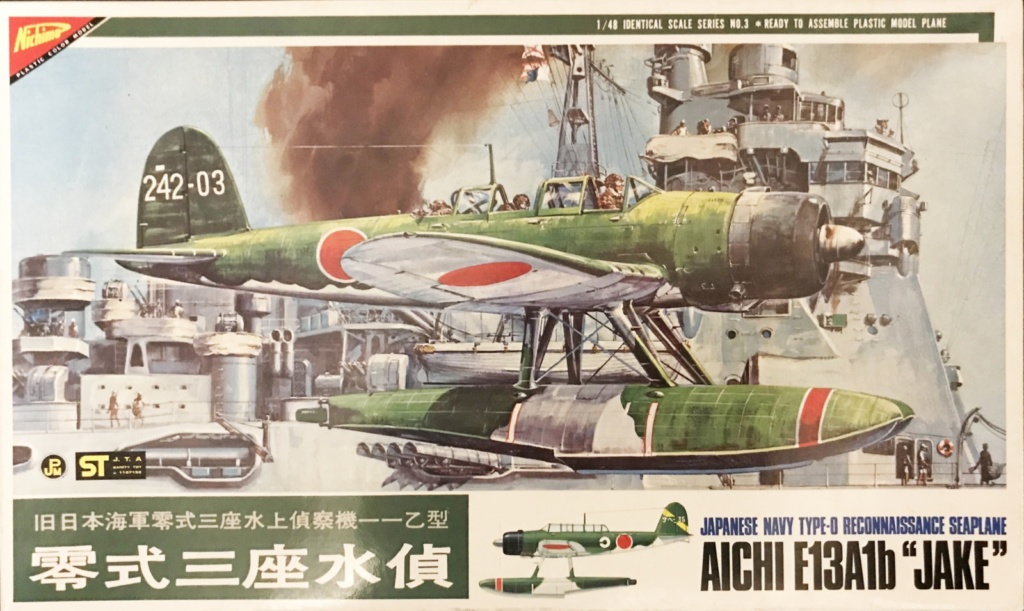 The Aichi E13A, by the Allied called Jake, was a long range seaplane. It was the mainstay reconnaissance float plane with the Japanese Navy during WWII and mostly operated from tenders or cruisers. It was used to scout Pearl Harbour fore the attack in 1941 and saw action in both the Battles Of The Coral Sea and Midway. The Jake had a wide variety of uses at sea and was used for for coastal patrols, strikes against navigation, liaison, officer transports, castaway rescues, and other missions, along with some kamikaze missions in the last days of war. Some eight planes saw service after the war in the French Navy during the First Indochina War.

Now, as with the Brewster Buffalo before you might wonder why I write a review of this old kit that is not generally available any more. Well the answer is, because I can. Nichimo, the manufacturer, went out of business in 2013 but this kit was released some time during the 70's (unclear when). A quick search on 20 February 2018 shows six for sale at Ebay, which is also where I found mine.

This kit really takes you back memory lane (well if your lane stretches that far). It is really simple. The mould has moulding flashes, there is the occasional cavities in the parts and the detailing is scarce. On the other hand you can build it with the rudders and brakes moving and you can even build it with the wings fold able (yes fold able not folded). This was fun for the kid in the 70's but a bit annoying for the scale model fan of today.

This time I bought no extras, simply because there are none available.

In stark contrast to modern kits there is virtually no cockpit in this kit. It contains a crew of three of which the pilot is just half. They are supposed to be glued directly on the panels, there are no chairs. This is a long way from etched metal parts, decals for the instrument panel etc. of today. There is a crude tail gun and you can build the rear part of the cockpit open but... I chose to omit that and close the whole thing up. As there is no pre made paint mask to be bought you have to cut your own (well if you're not miraculously good at free hand painting).

Even if this kit can be considered quite crude the parts fits well together. The instructions however have gaps that needs to be filled in by your fantasy. This is not a big problem though as the kit is so simple. Things like doing the engine cowl at the start and then never instructed to actually put it into place is something you can figure out by yourself.

The instruction also include a part about how to put an electrical motor into the kit to have the propeller spinning. It shows again that this is halfway between a toy and a scale model. This is also a reason the cockpit is as it as it would not fit together with the motor.

You soon find the main plane assembled. I chose to not attach the floats until after the paint job to make things simpler.

As this is a project build I wanted to build a specific plane. The scout plane that found and tailed the USS Yorktown which ultimately resulted in the sinking of this carrier. This means I needed to find other markings. The decals in the box was unusable after some 20+ years on someone's shelf. There's no after market decals to be found so I had to dig into my stash of leftovers. The challenge was the letter and digits. I could build a 'J' out of a 9 plus a 1 but when it came to the '5' I had to do with a darker red digit with white borders (there wasn't any white borders on the original or on the rest of the digits).

The plane I aimed for had a standard painting scheme for the Japanese Navy in the early years of WWII. That is to say grey. As I'm using Vallejo's Model Air this meant:

Having waited with the floats it was easy to attach the supporting wires on the struts before mounting them to the fuselage. When I arrived at the exhaust pipes I noted that the ones in the kit was not used but most 'Jakes' had smaller pipes. At this point I just gave up and left the exhausts out of the equation.

This is more a toy than a scale model, but it's the only one available in this scale.