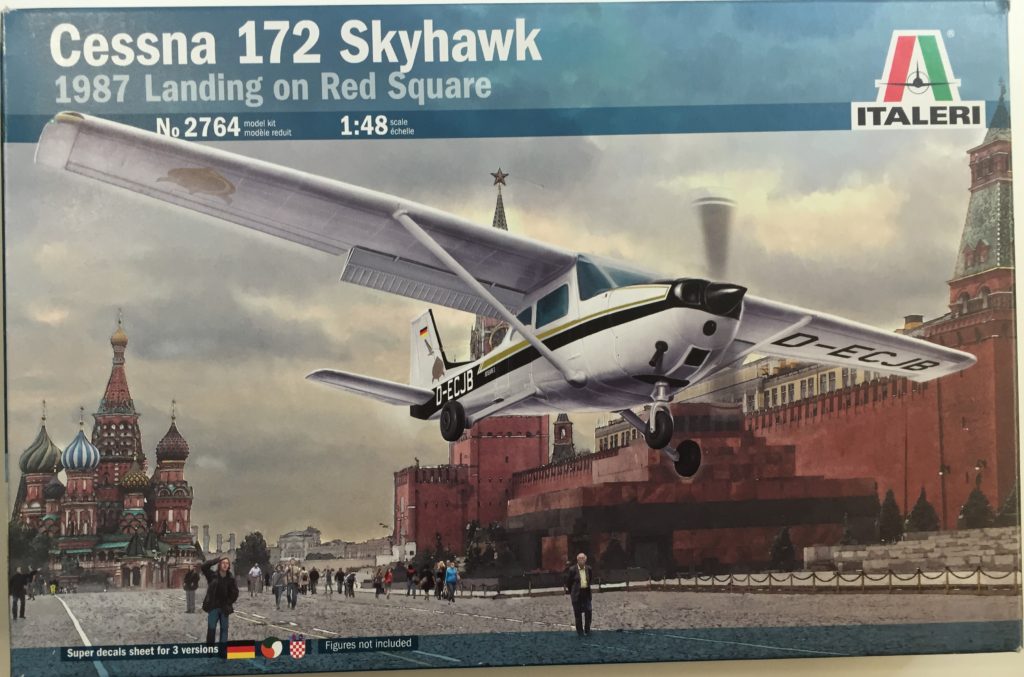 This is the only plastic kit of the Cessna 172 Skyhawk that I've seen, specially in scale 1/48. Most interesting here is of course that it was this type of plane that the West Greman youngster Mattias Rust used to trick the entire Soviet air defence when he flew from Helsinki and landed on the Red Square in Moscow in 1987 and of course this is one of the decal sets included in the box. The other two are military, one the Irish Air Corps and the second the Croatian Air Force. I can feel that this is a shame as this is a widely used civilian aircraft and it would have been nice with at least one more civilian version. But to be honest most people will buy this kit for the Mattias Rust version, that is also featured on the box.

The box contains the kit, instruction sheet and decals for three versions. The instructions are OK but not very clear in some details (I'll return on that).

Now, when it comes to the kit it self there is some issues. First the panel lines, they so large and deep it would make a ploughing farmer proud. Seldom do you see so exaggerated lines and rivets on models released today. (This kit was released in July 2016 according to Italeri's home page).

Another issue is to weigh down the nose, as this is a nose wheel aircraft. The instructions specify that you should use 15g to weigh it down and even indicate where to put it, in the engine room. Only problem is that there is an engine in the engine room. You basically have to fill everything else with weight which does not look good as there is at least three holes in the engine cowl on the finished model which makes any weights visible. 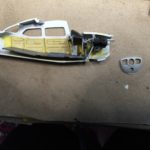 Fitting the windows proved to be another challenge as they are fitted from the outside and they are just a tiny bit smaller than the holes they should fit in so I thanked my lucky star that I hadn't glued the wings on top before fitting them (which one well could have done and still followed the instructions).

Well I was not in the mood for filling all the panel lines and put them back so I thought that some shading could lessen the effect.

Having finished the base colour (white) it was decal time. Now the civilian version (Mattias Rust's plane) have decoration lines on the fuselage and even if the decal sheet have separate registration letters to enable you to paint the lines it would be such a challenge to make them good without pre-made masking stencils so I opted for the supplied decals. They handled quite nicely and fitted quite well, specially considered that they parted over the tail wings. The nose still needs to be completed with black paint as the decals don't reach over the top and the front nose cowl.

Now here's another issue. When you study the painting schemes it looks like Mattias Rust's plane didn't feature the roof windows that the kit have. And lo an behold, a check with reference pictures from the web (Mattias plane have been photographed a great deal, wonder why? 😉 ) you can clearly see that it don't. There is no hint about this in the instructions, they just indicate to put the windows in. A hint that you should fill them, even out the lines and fix the surface would have been nice or, even better supply an alternative part without the holes for the windows.

To glue the last details on also had some few thing to wish for. The propeller shaft that goes from the engine is too short to reach in to the propeller so that has to be glued directly on the cowl. The main gear wheels have holes on both sides but the wheel axles are just to short to protrude the wheel. With all the issues I didn't feel like putting to much effort into the finish so here is the result:

This is a disappointing kit. The subject is interesting, not only because it's an historical plane but also because the civilian planes in the scale are scarce so I had my hopes up high. I have another kit from Italeri of the SAAB JAS 39 Gripen on the shelf which looks a lot more promising. I don't know but get a feeling that this is a reissued kit from the eighty's, it does not carry a 2016 standard. If you're prepared to put a lot of effort in fixing the issues, specially with the panel lines and replacing things like the antennas then you could get a good result, but more due to your skills rather than the kit it self.