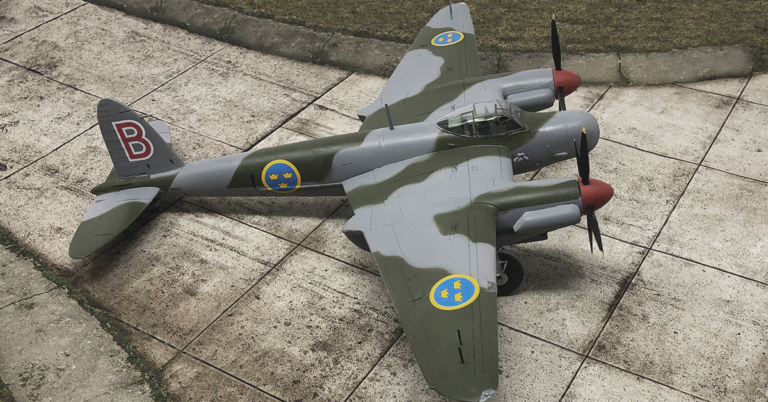 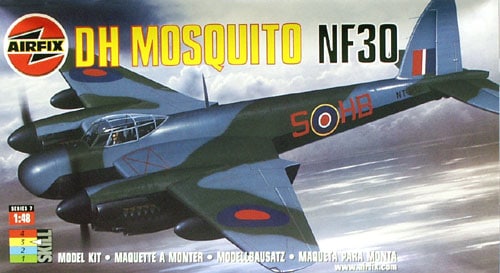 The base kit was first released in 1977 and has since been released several times in different versions. The version I review here is a re-release done in 2003 with new parts to make the night fighter version, NF.30.

It's easy to see that the kit has some mileage. The panel lines are raised on the original parts and the detailing lacks some, but still it's decent for being so old. The newer parts, the night fighter radar nose, upper halves of the wings, motor gondolas etc. have depressed panel lines. The design of the spruces for the new parts are also notable different.

To be honest, if I'd not been after the late night fighter version I'd probably gone for the later Tamiya kit.

After a long search I managed to get hold of this kit. The reason was that I wanted to build a Mosquito in Swedish service. Sweden bought 60 Mosquito's after WWII to use as night fighters. These however was re-fitted with four blade propellers as opposed to the three bladed original propeller. The previous owner to the kit I managed to secure already had a plan for this so I also got after market four bladed resin propellers. Most of the Swedish Mosquito's also had a canopy with a blister on the right side. This turned out to be a harder challenge. Finally I opted for a vacuum formed after market canopy with blisters on both sides. Not totally correct but still...

The cockpit is decently detailed for being such and old kit. Airfix had also, in the re-release version, included the radar observation equipment for the radar operator. I added some after market seat belts too.

The next step is to cut (saw) away the nose of the fuselage and replace it with the radar nose supplied in this version of the kit. This is not a perfect fit so some filling, filing and sanding is needed. Here it is a shame that the panel lines of the original kit are raised as you lose them doing this and as they're totally gone they can be hard to re-scribe.

The Mosquito's landing gear has always been a challenge for me. Their construction is a bit complicated and hard to get in place correctly (on any kit). Unfortunately they also has to be mounted when putting the motor gondolas together. This means that they have to be mounted when you do the paint job. The wheel house covers, which usually are one of my hate objects, are also delicately placed which doesn't help when masking and painting. Putting the wings together and in place is relatively easy.

The Swedish Air Force used the paint schemes the planes were delivered in, that is to say the same as the RAF used. As usual I'm using Vallejo's Model Air and after some reference check up on the net using conversion charts etc. I landed in these:

Giving this a glossy coat it was time for the decals. I bought after market decals from Moose Republic Decals. It contains decals for 11 different individuals. My choice fell on Röd Bertil (Red Bravo) from F 1. This was the last flying Mosquito in the SAF and retired in June 1954 (by then it had changed calling code though). After the decals I gave it a coat of matt varnish.

As a last touch I added home made antennas on the wings, some thing that the Swedish Mosquito's featured.

It's an old kit and as such it needs a bit more work than modern kits. It's a stark contrast to build this to modern Airfix products. But for being released in 1977 it's a decent kit.

It's the only Mosquito in the later night fighter version.

Raised panel lines on the original parts. The fit of the radar nose is not perfect and needs some fixing.