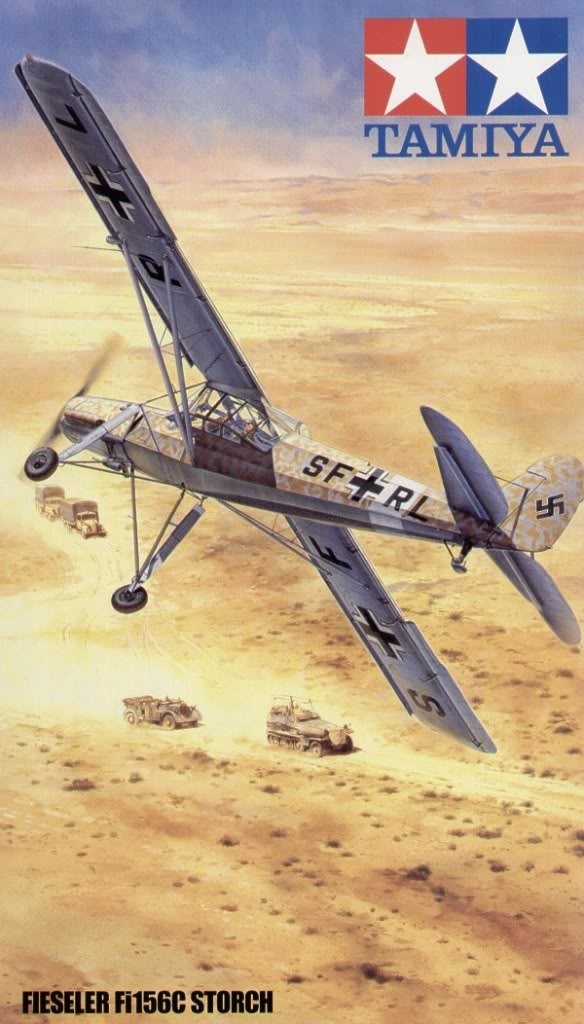 The Fieseler Fi 156 Storch was designed for Short Take Off and Landing (STOL). Production started in 1937 and it became a popular liason aircraft during the World War II. It was used by both General Rommel and later, in a captured plane, by General Montgomery as personal transports. It played a crucial role in the liberation of the dictator Mussolini in 1943 (the aircraft built in this review). The Storch was produced until the 1950:s (by the french) and saw service in none less than 25 countries Air Forces.

The kit from Tamiya in scale 1/48 is a well spent time. The box is on the luxury side with an extra sleeve and extra parts as this is Tamiya's 100th kit milestone edition. The kit contains, apart from the 7 spruces with parts, 1 sprue with clear parts, decals and instructions, also some metal parts. These are mostly designed to give the model some extra strength and stability. This is a good addition to a gangly and slender plane as the Storch. It comes with decals for five individual planes amongst which we can find General Rommel's personal plane and the plane that participated in the rescue of Mussolini.

I also added two extras in the form of:

The instructions start off with the engine. Though not very big it's still made up from nineteen parts. Putting an effort into it is worth it, specially as the Germans often flew with the side panels removed thus it will be largely visible if you build it in that way. The propeller shaft is metal which makes it easier to have the propeller as a moving part.

This aircraft is mainly a cockpit with an aircraft around it. With the large windows it's also worth to spend some time on it. I've added the extra part from Eduard's pre painted, etched, metal set (but not all of them). It's a fiddly task and takes some patience as it's a confined space and in some cases I had to do some compromises. Masking the cockpit windows is also a challenge and I'm happy that I bought the pre cut masking set.

Doing the fuselage and wings is a bit simpler as the kit has a good fit and don't need too much after work. Setting the wings to the fuselage, or rather to the cockpit in this case, is not too hard but you have to fix them until the glue has hardened to have them stay in the right place. The metal wing spar is good here as it really helps.

The landing gear is also helped by a metal base that gives it the right angle for a plane on the ground. If you want to do a flying version then some adjustments should be done as the gear was much more extended when up in the air.

I opted to do the Storch that played a key role in the Gran Sasso raid. So I used the following colours from Vallejo's Model Air series set 'Luftwaffe Colors 1941 to end-war':

Doing the masking and painting is a bit hard as it have to be done with most of the struts mounted and on this kit there are a few.

After a layer of gloss varnish it's decals time. Then disaster struck. I did not let the gloss varnish harden enough so one of the letter decals stuck in the wrong position and the disintegrated when I tried to correct it. Now what? I retreated back to the Facebook group 'plastic model spares and repairs' with a call for help. Lo and behold, I quickly got a reply from another modeller who quickly mailed me the decals that he happened to have in his stash. Thank god for internet!

All in all this is a good kit but also challenging to a certain extent. Not due to any faults in the kit but more because of the nature of the original aircraft.

Tamiya's 100th kit anniversary edition is a very good kit of the Fieseler Fi 156 Storch. It's rich in details and the metal parts adds stability to a sleek and slender aircraft. The decals gives you the option to build several interesting planes which can be hard to chose from.