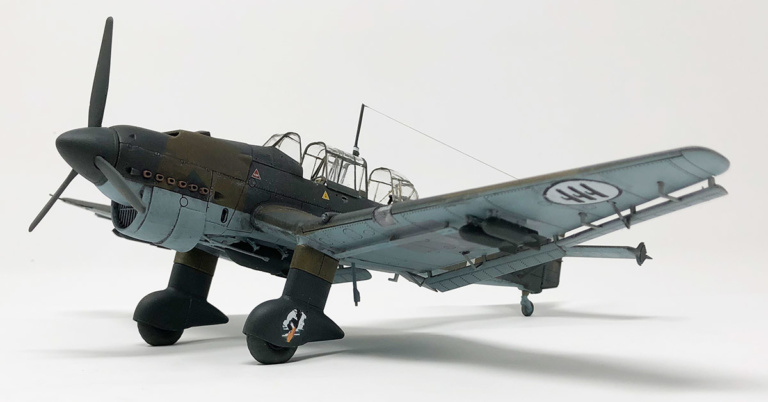 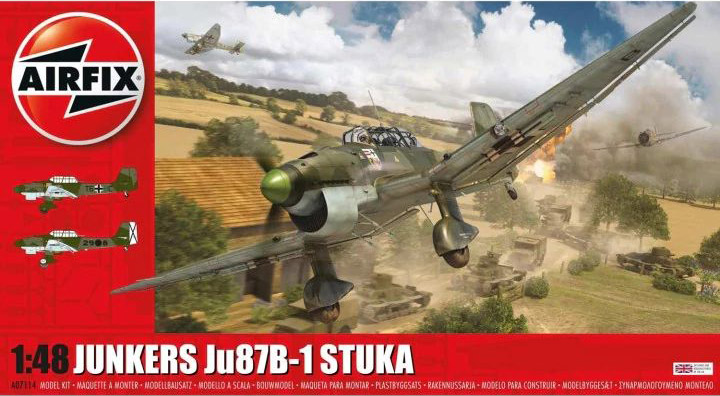 First released in 2017 this kit is one of Airfix recent releases. They have in fact already re-released it in a new edition, Ju-87R-2/B-2 since.

The instructions holds Airfix new standard with simple steps and parts that was added in the previous step are red in the next step so you can see exactly where they went. This is very pedagogic and helps a lot. Also when they offer different build options, as in this kit you can chose to build the plane with the engine cowls on of off (the later option displaying the engine), it is clearly stated which steps you should follow for each option and which you should skip.

The parts are well moulded albeit in a quite soft plastic making them a bit delicate. Panel lines etc. are distinct, maybe too distinct for some but I like them. The fit is excellent and detailing like inside the cockpit is good for this scale. The construction is also well thought through. Like the wing spars which greatly helps you to get the right angle on the v-shaped wings so characteristic for the Stuka.

As this kit is quite good in details I decided to build it more or less 'out of the box'. Being a German WWII plane I did buy after market paint mask mainly for the canopy. I also bought some after market decals as I wanted to build an Italian Ju-87B. This is what I got:

As per usual you kick off with the cockpit. As stated above it is reasonably detailed and looks good if you put some effort into the painting. The only thing I'm missing is the seat belts. It would be good to have them represented in some way or another in the kit. Now I made my own from Tamiya tape and left over etched metal parts. A tricky manoeuvre is to thread the fuselage (the halves already glued together) over the cockpit interior. It's described in two steps in the instruction and needs some delicate handling not to destroy anything. The instrument panel comes with decals and as the panel has raised details it needs some MicroSol and finesse to get a good finish.

One of the options this kit has is to display it with the armament hatches removed revealing the guns in the wings. This will have you cutting the hatches open in the top part of the wings. I would have preferred to have them as lose hatches as cutting in so soft plastic can easily go wrong. Now for 99% of the time these hatches were closed (they were opened only for rearmament) so I skipped the guns and left the hatches closed.

All rudders are separate in this kit which is a good thing as you can set them in any position. For the elevators they have even supplied different fin tips for the different positions.

The next option is if you want to display the engine. If you want to do this just to build the engine is a 19 step affair. I'm sure that it would look splendid when done. The way the Stuka, and also this kit, was/is constructed it is either or. You can not build the engine and then cover it with the hood. And, again, in 99% of the time (if not more) the hood was mounted so I chose to do it closed. It feels a bit of a shame as it would have looked impressive with the engine visible but then again you would have lost out on some other aspects.

The wheels have a nifty solution. As the Stuka has wheel covers the kit offers you to mount the wheels in one of two ways. Either with fully inflated wheels as it would have looked while airborne or the other way around with the wheels a bit deflated as they would have been on the ground. In the later option it is also ensured that you will get the deflated part in just the right angle which is not always easy.

Next are the rudder on the wings. On the Stuka these were detached from the wings at a slightly lower level. The kit provides you with two sets. One with the air brakes lowered and one with them in neutral position. Now this is this kits second challenge. To set them in place is not easy. They attach at six points with small pins per wing. In addition to that there is 2 +3 control pins that should fit into holes in the under surface of each wing. It's a fiddly affair. This is not a bad design point from Airfix, it's just the way the Stuka was constructed.

The Italian Stukas (called Picchiatelli by the Italians) kept their German camouflage. As I use Vallejo's Model Air paints I it was quite easy as they have the German colours clearly marked:

The German national insignias was over painted by the Italians using Italian green (top side) and grey (underneath). I used the paint masks in Montex masking kit to achieve this. After a gloss coat I applied the Italian decals. The squadron insignias on the wheel houses I copied from Tony O'Toole's excellent book "No Place For Beginners - Battle Over Malta: June 1940 - September 1941", enhanced in an editor and printed them on white decal paper. The Italian serial number on the fin on the original was hand painted so I also hand painted them.

The canopy also comes with two alternatives. One open and one closed option. The middle section comes in two version. The open version is a good thing but also an extra challenge. Usually when you have a cockpit hood that slides over another section they will make them as two separate parts and then, if you want to have it open, you have to try to fit an all too thick part over another and it won't look good. Airfix has solved this by supplying these two as one part (representing both parts, one over the other). This is nice as it will look a lot better. The challenge comes when you want to paint it. Some sashes must be painted from the inside. This means masking both the inside and the outside. Not really an easy task.

The propeller is, as in all Airfix recent kits mounted last but still rotates which is a good thing as you don't want to paint the kit with it mounted as it tends to get in the way. On the whole a pleasant build.

Following the new Airfix standard this kit has some smart build solutions and is full of nice options. It is well moulded and the parts fits excellent together.

The rudders on the main wings are fiddly (but that's more Junkers fault than Airfix'). The open option for the hood is a challenge to paint.