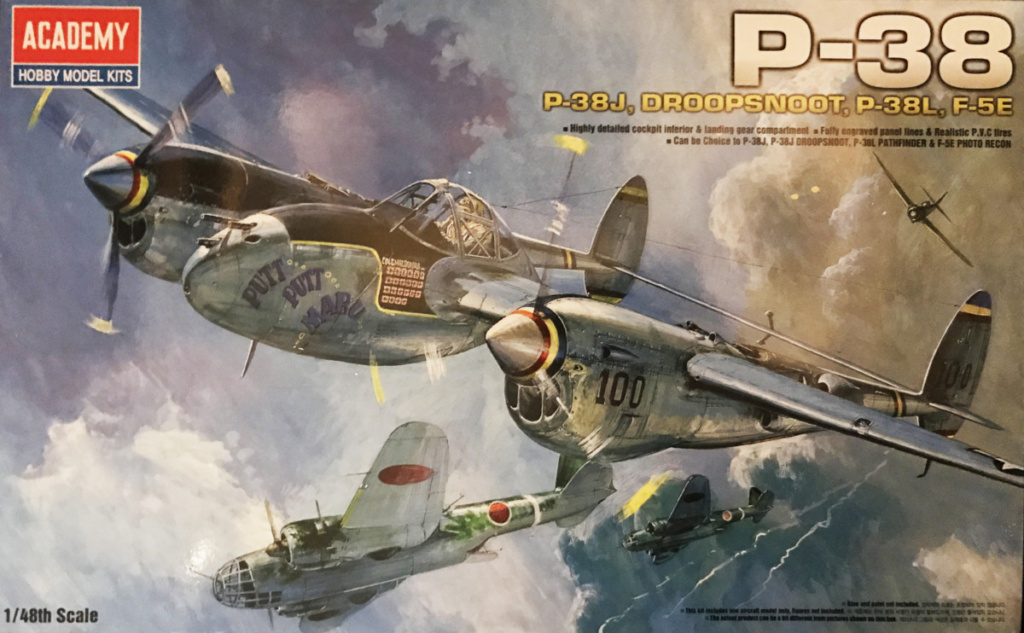 This kit of the Lightning has been around for some time now as you can notice as soon as you look at the box to be frank. The kit is quite ordinary if you look at it today but when it was new I suspect it was considered quite good. The box contains means to build four different versions of the P-38, the standard P-38J which you can build as "Putt Putt Maru" one of the most famous P-38, a P-38J Droopsnoot which was used as a bomber leader with an extra crew bomb sighter, a P-38L Pathfinder which had a similar role as the Droopsnoot but with radar this time and finally a F-5E Photo recon which was the reconnaissance version of the P-38.

I'd decided to go for the standard P-38J fighter version. However I wanted to build an individual that was flown by Robin Olds (see the Phantom review) so I ordered some extra decals.

Now one of the first issues you encounter is the way parts are attached to the spruces. Today you'll see on most modern kits that the manufacturer has gone out of their ways to attach parts where you can cut them loose with as little damage or after work as possible. Not so in this kit. Lets see at the wings for example, they are attached in the front edge. This is one of the most visible parts in a finished aircraft model and you need to really cut carefully and then work with a file and sandpaper to make it invisible. 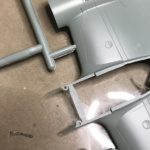 The cockpit is OK but not fancy, there is no seatbelts for example (neither as moulded to the seat or as decals let alone some pre painted etched ones). You have to do your own or as I did leave them out (or go buy some after market ones). But if you decide to build it with the cockpit doors closed then it will do.

The P-38 is unusual in it's construction as a twin engine fighter with twin tail. It's also noticeable as the fuselage and the wings are basically two parts, top and bottom. The parts could fit better and getting the engine consoles and the front part of the nose in the right places is a challenge. A lot of tape, rubber bands and clamps is needed. And even if you're good at that there is some filling and sanding needed after that, specially in the nose.

This kit really needs it's extra weight in the nose if you don't want a "tail sitter". I used 25 g of air gun pellets, flattened and wrapped in some duct tape. Works like a charm.

Another thing with this kit is that the landing gears are supposed to be mounted at an early stage. This would complicate the painting process and I left them out till a later stage which is harder but non impossible in this case. As I wanted to paint the propeller spinners when glued together before adding the propeller blades (separate in this kit) I cut of the little fitting pin on the blades and glued them in by my own judgement instead.

For painting I used Vallejo's primer (black) and different Metal Color's from Vallejo. For the green anti glare areas on the nose and engines I used Vallejo's Model Air 71.017 US Dark Green.

The decals I used out of the kit, as national insignias and small instruction texts was OK but not great. The smaller national insignias was a bit off with some white showing at the upper rim. The after market extra decals turned out better as they adhered better to the surface.

This kit is a bit dated and as such it's OK but not good. There is not so many P-38 kits out there in this scale and most of them also have a few years behind them. The panel lines and such still show that this was a really good kit when it was new.