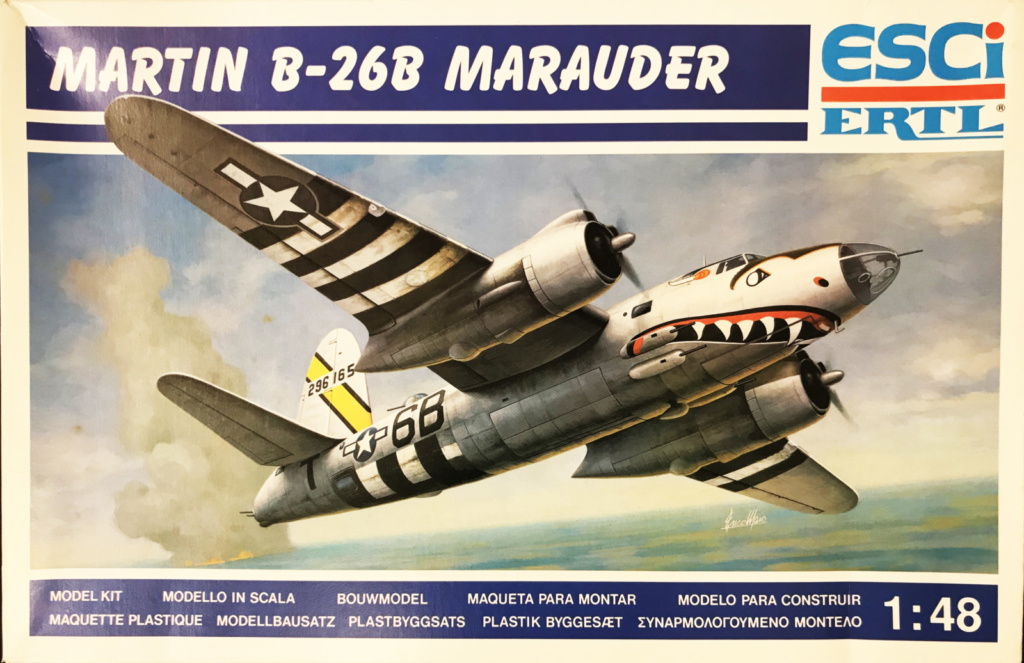 The B-26 Marauder was Glenn L. Martin Company's submitted design to a request from the United States Air Corps specification for a new twin engined bomber in 1939. It was evaluated and accepted and awarded a contract for 201 aircraft. Another 930 was ordered before it even flew for the first time. This it did in November 1940 and the first planes were delivered in February 1941. The Marauder turned out to be hard to handle, specially it's required high landing speed made unaccustomed pilots come in too slow and have the plane stalling. This earned the plane the nick name "The Widowmaker". Despite this the Marauder turned out as quite good plane and was used both in the Pacific and European theatre during WWII. Besides the USAF it was used by the RAF, Free French forces, South Africa and Turkey. After the war a few were converted to executive air liners with room for 15 passengers. One surviving Marauder now in Virginia holds the record for surviving the largest number of operational missions over Europe, 207, more than any other American aircraft during WWII.

Esci's kit has some times been claimed to come from Monograms kit but there is to many small differences for this to be true. The extras as photo etched metal parts and paint masks I'd bought did clearly not fit so I think we can conclude that this is not the same kit. The kit is from 1992 but feels even older, it's clearly not up to the standard of the kits released today. The panel lines are protruding as opposed to engraved and in places the fit is not impressive. Still some parts fits surprisingly well. These are the extras I used to the kit:

The inside is fairly detailed for an old kit. It was when I was trying to install the after market detailing for the cockpit I realized that this kit was not the same as the Monogram kit. To judge from the instructions for the Monogram kit I can conclude that ESCI's kit is at least as well detailed as Monogram's. Why on earth ESCI (or originally AMT) want's you to mount the nose wheel directly in step one is beyond me. I still mounted some of the extra detailing before totally giving up. It turned out okay but I had to do some filing to fit it.

Some filing was also done on the fuselage. I'm building a Marauder from the Battle Of Midway wich was a B-26 and not a B-26B. So away with the extra armour on the left side and the pins to mount the fuselage guns. There is a few other things that differ as the propellers but the one thing I did not fix was the rear gun mount as that would be to much work.

The rear guns and gun turret are quite simple. The fuselage have six inside walls and I was expecting that getting the two fuselage halves together would be a hard match but it fitted quite well. No gaps in the joints. The wings were not as good. Specially when you're trying to fit the engine gondolas. There are noticeable gaps that needs to be filled. Also the windows in the fuselage doesn't fit that well. Getting the wings in place was also not very easy. The guiding bars does not lock in place and to hold them in place needed a tape instalment.

The bomb bay doors are for some reason meant to be built in an open position. I can understand why if you put an effort into doing the all the bombs inside, so the possibility should be there. But the planes seldom had the doors open except for loading (and discharging). So I think you should have a choice. Now you can cut off the holing pins and glue them in a closed position but then again there is large gaps. Still it left gaps that needed fixing. To be honest all this filling and filing put me off a bit and the finished model is not quite up to my usual standard.

Omitting the landing gears and propellers till after paining, I then concentrated on the paint job. A coat of grey primer and I found more gaps that needed tending. With that done (and more primer) I did some pre shading with the air brush and black colour.

The colour scheme is a U.S. Army Air Corps standard from the first half of the war. As usual I use Vallejo's Model Air colours.

Then a gloss varnish coat for the decals. There was no decals for SusieQ, the plane I'm building, so I went shopping for general decals and found these:

After mounting the landing gear went smoothly. I used the resin tyres even if the front wheel looks a bit small. The front wheel in the kit looks really hideous and too large. As I wanted to do the get closer to the B-26 rather than the B-26B I carved the propellers to another shape and added some home made spinners. Adding the torpedo (not included in the kit) and some finishing touches and the kit is done.

Have a look in the gallery below.

This kit has some years behind it and it's apparent. Now I haven't seen the Monogram/Revell kit but if I had to do the choice again I would go for that.