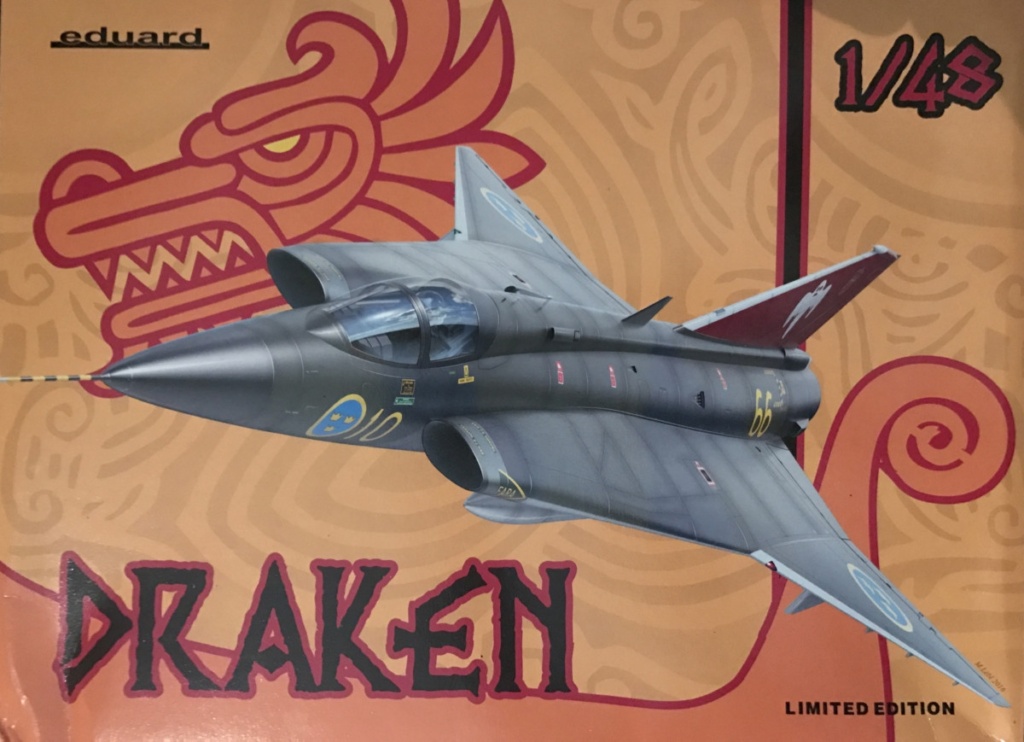 Having built Hasegawas J35 Draken before I knew this was a good start. This box also included a great deal more stuff that you normally have to buy separately. Beside the Hasegawa kit this box also contain resin parts as wheels (two different sets for different versions), the ejection seat and also parts for an arresting hook for the Danish version, etched prepainted cockpit parts as instrument panel and seat belts but also a sheet with extra detailing for other parts of the plane, paint masks for the cockpit hood and the wheels and finally a large decals sheet for four different versions, one Austrian, one Danish, one Finnish and one Swedish.

Being as I am I went and bought some extras on top of that, namely:

The last item was because I wanted to build a version of the Draken that flew from F16 air base here in Uppsala where I live. So the end result here will differ a bit from the supplied kit.

Now we kick off with the cockpit as so many times before. The etched and prepainted parts for the instrument panel adds a great deal of realism to the kit. I also cheated and did the ejection seat first and not last as per the instructions. After doing these details it really feels a bit sad to hide them in the fuselage.

The fuselage comes in two halves as usual but in this kit it's not the left and right part but the top and bottom halves which makes a lot of sense when it comes to this aircraft. All parts fits nicely and if you're careful then a minimal after work is needed. Weighing down the nose is necessary but also quite easy. Fill the nose cone with lead (I use air gun pellets) and the kit will stay down on the nose wheel. The rear part of the engine is mounted late in the process, this makes it easy to paint the kit. You can mount it on a paint stand easily with (excuse my language) a stick up it's arse.

Painting the standard Swedish camouflage for the Draken can be a challenge if you, as me, use Vallejo's Model Air paint. With all the cross reference charts found on the internet it's still almost impossible to find correlating Model Air paints. After some trying and picture referring I landed in the following:

I tried the method of using masking putty for the first time to get the camouflage edges to look more air painted rather than the sharp masking edges. For being the first time it went OK.

Doing the undercarriage involves a couple of fidgety etched parts for detailing with wires. Usually I'm daunted by these small things but this time I went ahead and did them. It required good eyesight, tweezers, toothpicks and super glue but the end result was worth it.

The rear part of the engine is supplied with an etched metal part for the inner grid which adds a lot. If you as me also bought resin parts to replace the kits rear engine parts then the end result is magnificent. Specially if you use Vallejo's Metal Color 71.713 Jet Exhaust paint on it.

As previously stated I didn't go for any of the included decal versions. The aircraft I built is a J 35A Draken that flew at F16 here in Uppsala, Sweden. It was later donated to the Imperial War Museum at Duxford, Great Britain, and is now on display in their collections there. The camouflage scheme is the same as on the Swedish version in the kit but the markings differ. I also had to re module the top of the tail fin to look like the J 35A (it has a pitot tube further down and the top fin does not bulge). Fortunately for me this specific aircraft had been fitted with a later version engine cowl so I did not have to re do that.  Here is the end result:

This was a good kit to start with but Eduards extras in the Limited Edition has made it even better. Of course it also raises the bar on building it but it is certainly worth it. The extra detailing makes this a great kit.