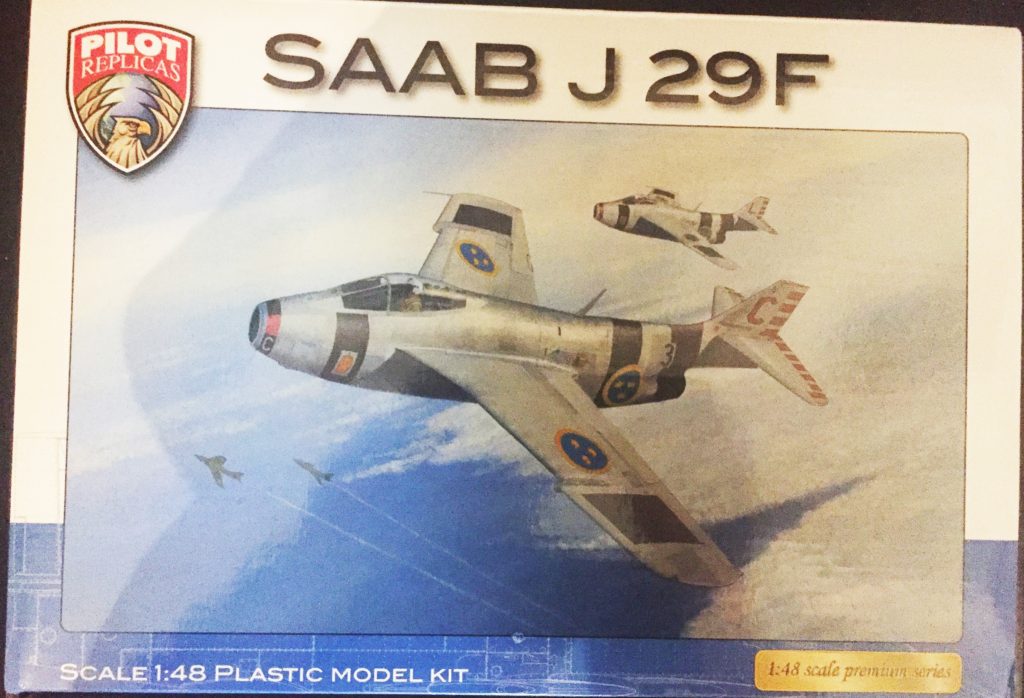 Pilot Replicas boast with the slogan "When only the highest quality will do" and I'd say they deliver. This is a kit you can fall in love with and you'll see why when you read on. The box contains the kit itself, a small sheet with etched metal details containing seat belts and rear view mirrors, two glossy instruction sheets (one for building and one for painting) and two decal sheets with markings for three different aircrafts. The instruction sheet is clear, distinct and easy to follow. A real treat are the colour reference table with four references, Tamiya, FS595, Humbrol and Vallejo. Specially the last one as I'm using Vallejo colours and this is the only kit maker that has given me direct references.

As so often is the case you start out with the cockpit. This is reasonably detailed with decals for the instrument panel. What differs here is that the decals are only the instruments themselves, you still need to paint the panel which I think is an advantage as you can choose the colour yourself and also you don't need to worry about the decals protruding the edges of the panel when it's time do attach it to other parts. A dream would of course be to have prepainted photo etched parts but there is non available. This time I wanted a pilot seated in the cockpit but there is no one in the kit. Fortunately there is one made for this kit available from Pilot Replicas separately, actually there is two different but for my purpose my choice was this one.

The fuselage comes in four main parts which is quite unusual but works well in this case. All the parts fits like a glove and a minimal work is needed on fixing joints etc. The panel lines and rivets are (as far as I'm concerned) very well depicted. Discrete enough to look authentic but sharp enough to be visible. The four wing parts are moulded with the sprue attached only at the wing root, i.e. there are no attachments at the wing edges that needs to be carefully removed. Highest quality in my book. If you don't want the air brakes in the open position I recommend you to glue them in place before attaching the lower part of the front fuselage where they are situated. It would be very tricky to get them in a good closed position if the fuselage is glued together already.

If you want to take it even further then there is a few detailing parts available from the same manufacturer such as metal pitot tubes and resin drop tanks. Soon there will me a seamless air intake too.

They recommend that you use Vallejo's Metal Colour 71.716 for the Semi Matt Aluminium for an overall base coat. A good choice as the J29 Tunnan has an unpolished exterior. Then they recommend that you use other colours from Vallejo's Metal Colour range for different panels to get a more realistic look. This is all fine but the contrast between most of the Metal Colours and Semi Matt Aluminium is big. I recommend that you, after applying the decals, give the kit an overall coat of Matt Varnish for many reasons. It dampens the contrast between the different Metal Colours, it blends the decals to the surface and make the look more like painted on (this is also needed as the decals are quite glossy) and finally it gives the entire surface its unpolished look back.

The only let down in this kit is the decals. Don't get me wrong, they are the best J29 Tunnan decals I've seen when it comes to accuracy. The decals for the AZ kit or the Hobbyboss kit are certainly worse (well the Hobby Boss kit is worse in so many ways). But the decals in this kit are sturdy, this is a problem specially when it comes to the national insignias on the fuselage. The surface they go on  really need the decals to conform to a bent area with a valley in the middle. The first build I did of this kit I used national insignias that I had left over from another kit but this time around I was determined to have them work after having a message exchange with the kit manufacturer that claimed it should work if I used Micro Sol to soften the decals. Yes it works. If you use a shit load of Micro Sol. I lost count of the number of times I went over them but at last they looked good. For two of the versions there is large decals for painted areas. Black in one case and day glow orange in the other. I'd recommend you to mask and paint these areas instead of using the decals.

This time I decided to built an aircraft individual that my grandfather took a diapositive picture of some time in the later half of the sixties, so the markings are not out of the box but I've built this kit before and include some pictures of one of the versions in the kit too.

One of the versions out of the box:

I really enjoyed this kit. If you are building the SAAB J29 Tunnan, then this is it. Even if you were not planning to build the Tunnan specifically then I still recommend you try it. The kit is clearly constructed by a team that knows modelling and aim for accuracy and authenticity. I can't wait for their SAAB 105 (Sk 60) and De Havilland Venom that are announced but not released yet.