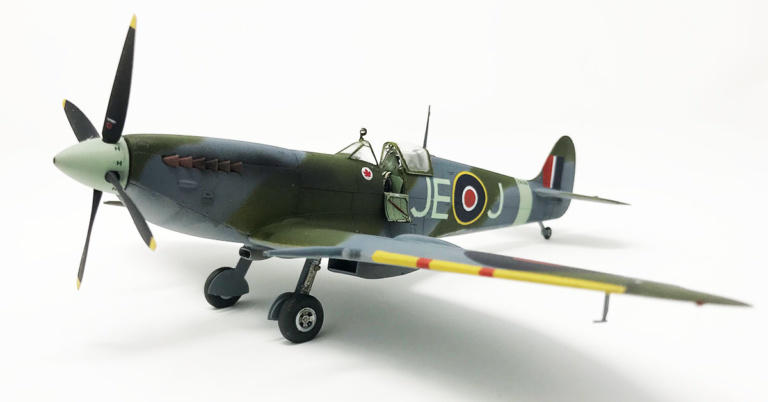 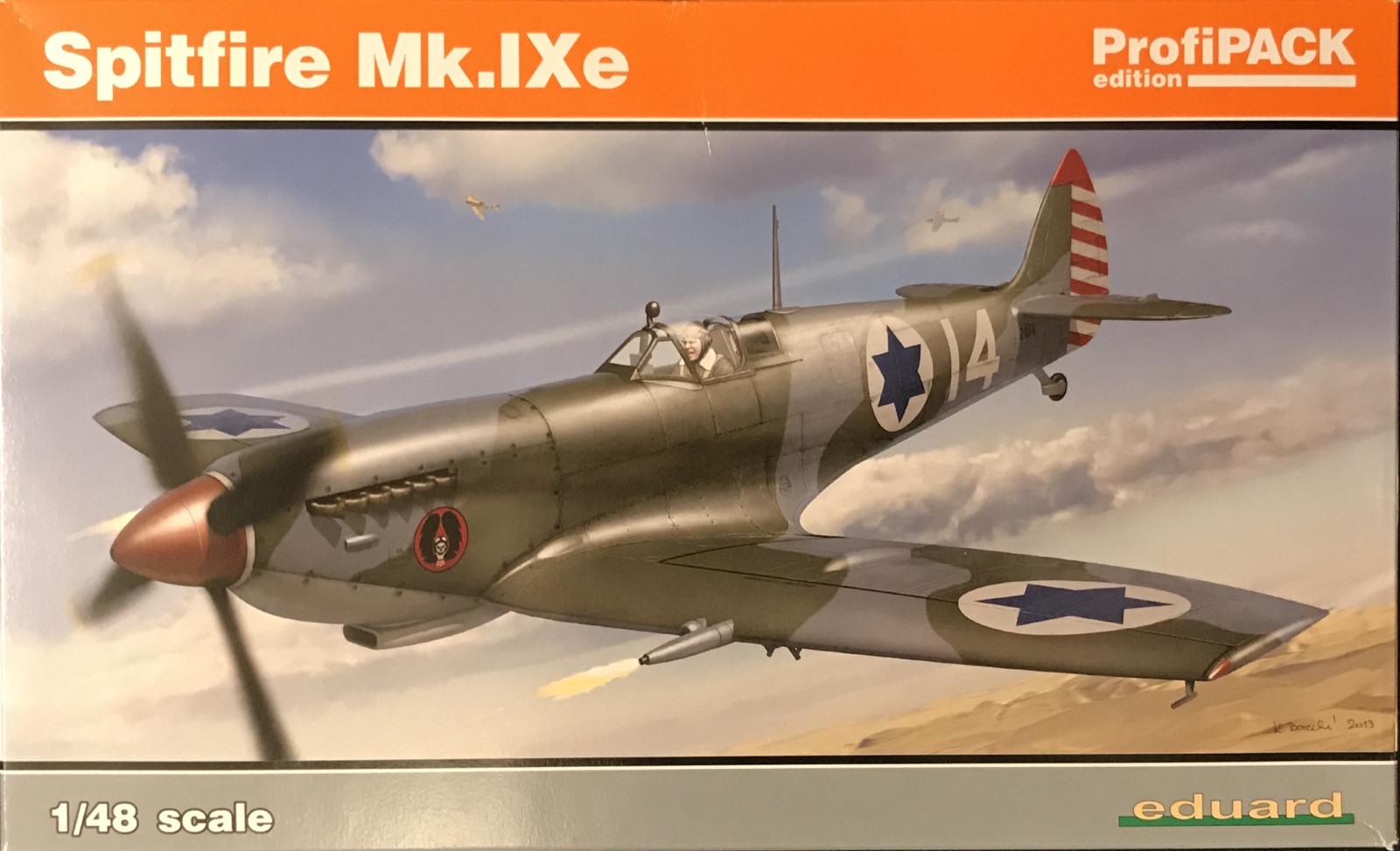 This is one of Eduard's ProfiPack Edition kits. This means that besides the usual plastic spruces, decals and instructions it also contains pre painted photo etched parts and a paint mask for the hood. The kit has been released by Eduard in different versions several times covering different versions of the Spitfire Mk.IXc (early and late versions) and the Mk.IXe. It is also evident as the kit contains several interchangeable part as the wing tips and the nose chin for example. Some of these are not used in this version of the kit.

The decal sheet is extensive with no less than five different markings.

The parts are expertly moulded with fine panel lines and details. Also things like separate rudders, smart partitions of parts and sprue attachments are tell tales of a company that cares about modelling. The parts also fit together well and the need for filling and filing is negligible.

This was an enjoyable kit to build. My aim was to build the plane flown by Johnny E Johnson, a Canadian flying ace that flew in the RAF. I had searched for a while for a suitable Spitfire Mk.IXc and actually bought two, this one (a Mk.IXe) and one from Ocidental Réplicas. But this was a much better kit so I decided to convert this to a Mk.IXc. This kit has been released as a 'c' also but I couldn't find a copy. There are a few parts that differ but more about that later.

The cockpit is the main feature of this kit consisting of 49 parts. With the added details as a separate lever on the steering stick and other details it really comes alive. On the other hand it also makes the kit harder as you need some really good magnifying glasses to handle a few of these parts. After practising over several detailing kits I'm now starting to get a hang of it. But a pre painted instrument panel is hard to beat by hand though. I think the most minute and microscopic part was the three part opening handle on the cockpit hatch. A faulty move here and the parts are lost forever. Some extra spares would have been nice. The lower walls of the cockpit is separate which makes the construction a lot easier.

When you come to the fuselage and wings is when it becomes apparent that this kit is constructed to be issued as different versions. Like the front part of the wing root that is interchangeable. This also means that the top and bottom engine cowls is separate parts. This is really a bonus as you don't need to handle the usual fuselage joints. Instead the joints end up at the natural joints in the real planes construction. The fuselage comes together well. Here comes the first of my challenges though. The Mk.IXc had a different shaped air intake under the fuselage at the wing root. Fortunately the intake itself is included in the kit (marked as unused) but the lower wing part is not. It's a different lower wing part in this kit. So here I needed to do some putty filling and sanding.

Next are the wings. The lower wings are, as mentioned before, one part and the upper wing halves two. The wheel wells are well done with separate walls. The wing tips are separate parts as these differed from different version of the Spitfire. Both parts for the clipped wing tips and the usual version are included in this kit. Now came the second challenge to make this a 'c' version. The blisters on top of the canons on the wings. These were substantially larger on the Mk.IXc than on the Mk.IXe. Again these are in the other release of this kit but not included in this mould. I solved thsi by plundering the Ocidental Réplicas kit cutting off the blisters and replacing these on this kit. Not the best result but good enough.

After some pre shading it was time for some paint. Johnnie's plane had the standard British colours of the time and using Vallejo's Model Air I went for:

This time I also painted the insignia roundels with masks that I've bought extra. For the planes identification letters I used the decals supplied in the  Ocidental Réplicas kit and for all the small markings I used this kits decals.

Having done this it was time for the final parts as the landing gears, the propeller etc. Some final light weathering and the kit was done.

Eduards kit of the Supermarine Spitfire Mk.IXe is the best Spitfire I've built this far. It's not for the beginner with it's etched metal parts etc. but the instructions are clear and unambiguous. A real joy to build.

The detailing is exquisite and the parts fits really well. The kit is constructed by people who know their job.

I have to come back to you on that.