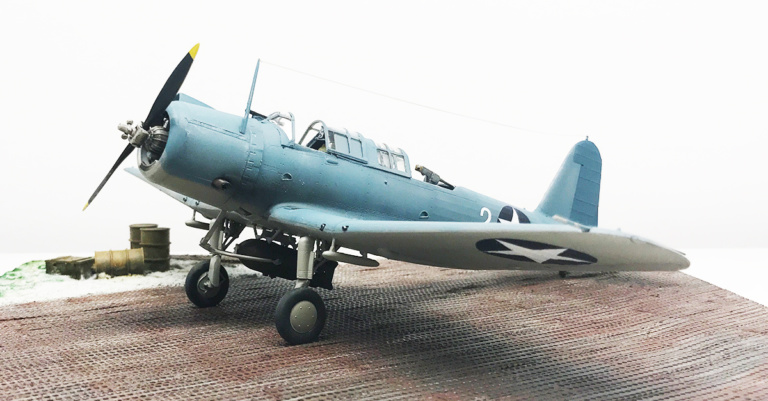 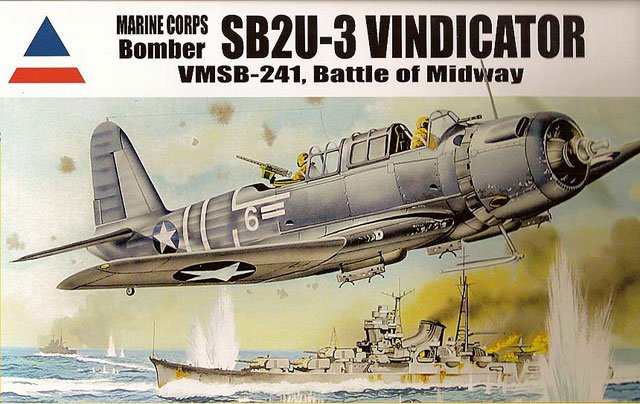 It's a pity that Accurate Miniatures has ceased to exist because they did excellent models. This is no exception. The kit is well done with fine panel lines and the parts fits well. The detailing in the cockpit and engine is good. The instructions are a bit different. Each page has one picture with what to assemble, then below there is a text describing each step, like "1-1. Cement the seat frame (46) to the triangle shape on the rear panel of the cockpit floor (42)".  On the top left corner there is a list of all part numbers with a description of what colour(s) each part should have. There are no reference numbers for the colours just descriptions like "49: Aluminium with black handle".

Its a fine kit and deserves to be re-released.

The decal sheet has eleven different markings, all from the Marines at Midway by the time for the famous battle.

Working my way through the planes of the Battle Of Midway the turn had come to the Vindicator. I have to start off with telling you that this one I bought off Ebay. And it came in the original plastic bags but without the box, decals or instructions. On the upside it came as two complete kits. It is not generally available any more BUT Academy has announced that they are going to release a rebox of this kit in 2018. The instructions was available on an old copy of Accurate Miniatures web site. The missing decals was not a serious thing for me as I'm starting tu use masks more and more and there was a mask available for this kit. So this was the extra I bought for this kit:

We start off with the pilots compartment. It's a frame construction that is quit rich in details. You don't really feel the need for extra photo etched parts etc. Some times I was a bit uncertain on how to fit the parts as the instructions are not always that clear. But the parts are well constructed and when you try and fit them they fall into place and you realize how they should be. The gunners compartment likewise is a frame construction and well made. Having fiddled with the gun emplacement ring and seat in a Devastator and a Dauntless I have to say that Accurate Miniatures engineering of this is the best and most stable this far.

The fuselage closes OK over the cockpit but there is a third part to the fuselage, the underside. This is where they have not succeeded quite as well with the fit. It's hard to get into the right position and when you've done the best you can you still need some filling.

The engine is also well depicted with tubes and rods. The engine cowl is a bit odd. The cover comes in two halves which is not that uncommon but the the joints are not placed at the top and bottom but about one quarter to the side. As the cowling is oval this looks real odd until you've glued them together. My guess is that Accurate Miniatures have tried to follow the real joints on the plane. It is also quite thin. As they state in the instructions: "The engine has been designed to precise scale, and fits into the cowl with very little room to spare." A noteworthy ambition and I like it. Unfortunately the front cover is a fragment smaller than the cowl and some filler is needed.

There are some other odd decisions made. The tail fin for example is moulded to the tail but the trim fin in the tail fin though is a separate part. Nice touch but a separate tail fin would have been more natural.

Before doing the landing gear, the ordnance and other details it's painting time. Doing a Battle of Midway Vindicator they had the standard U.S. Navy colours of 1942 so I used the following colours from Vallejo's Model Air series:

In the instructions there is a paint and decal page. These are incorrect though. This is also odd because in the text they first state: "Since no photos of "White 2" are known to exist, color and markings are an educated guess, based upon information currently available." But the they continue by writing "Based upon the few existing photos of Vindicators taken at Midway, along with John Ford's film "Why we fight", it has to be determined that...". Well they must be referring to John Ford's "The Battle Of Midway" ("Why we fight" was made by Frank Capra) and in that film there is a scene with several Vindicators taking off. One of them is "White 2"! The third plane shown to be exact.

There are some major discrepancies. The national insignia on the fuselage is much larger and placed differently. There are no white stripes on the fuselage (medical tape that they used to keep worn fabric together) on this plane. The underside or the wings are not blue but grey. The tail fin is dark blue, an effect of the older markings with red and white stripes had been painted over. Something that was done on all US planes shortly before the Battle Of Midway. Luckily I had paint masks to do this right.

The landing gears are easy to after mount even if they are a bit complicated (each gear is five parts excluding the wheel). You can also chose to do them in wheels-up position. The wheels comes in one set for the flying version. The other set a bit compressed for a plane standing on the ground. The ordnance and other details are straight forward.

The kit is is a very good kit. Well moulded and detailed. It's really a kit that don't need any extras or fixing. The only disappointment is the incorrect painting and markings instructions when there is an excellent source that they're even referring to them selves.

It's a great kit of the Vindicator where they worked hard on accuracy.

Shame that they got the paintings and markings wrong.