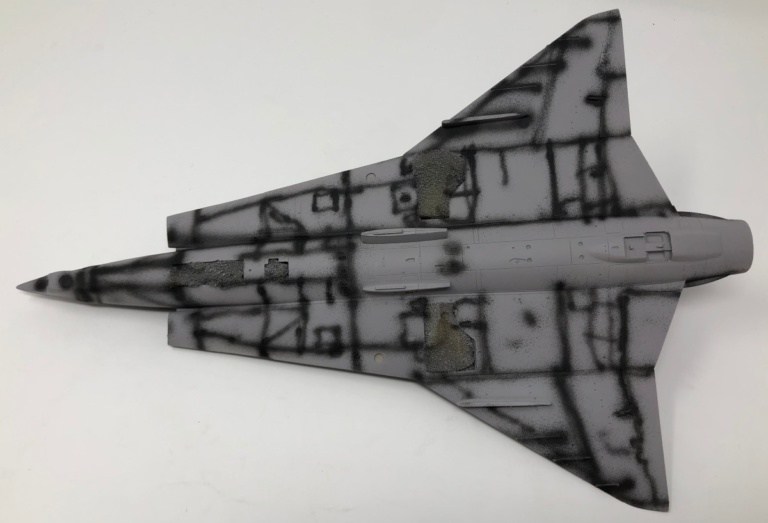 My paint and weathering technique.

To build plastic models is a constant learning process. On your learning path you pick up tips and tricks of the trade from a lot of different sources as fellow builders, web sites, books and magazines. Over time you develop and acquire different skills and tastes. At the moment I try to make my kits look a bit weathered (but I try not to go over the top).

Here I will explain how I paint and handle my kits to get that used feeling. It's just about the paint process. There is a lot of detailing stuff too but this is all about paint finish. (Of course you can add to this as chipping techniques etc. but this it a plain paint job).

I usually do the painting when the main parts of the model is done but not any protruding details as landing gears, propellers, antennas etc. is in place. This makes the process so much easier. This time I'm building a Saab S 35E Draken on which I will show my process.

First thing first. As I'm using acrylic paint (Vallejo's Model Air to be precise) I always start off with giving the entire kit a base primer. First I mask off details already painted as wheel wells and cockpit. I've tried different methods for this but now days I use pieces of sponge and seal off with tack where needed.

Giving the kit a even layer of primer also reveals any blemishes that you might want to fix before proceeding. In most cases I use grey primer as it goes with most colours. Only exception is if I'm doing a metal finish kit in which case I use a glossy black primer or if I'm doing a white or yellow over all paint, then I use a white primer.

If you just paint on top of the primer you will get a very flat surface. This is fine if you want to make you aircraft (or what ever) brand new. With a little bit of wear and tear, sun bleaching and oil leakage etc. the surface will not look flat any more. To create this effect I pre-shadow my kits. This is done by airbrushing black (or dark grey) along the panel lines and other places that tends to have a darker shade.

You can take this further by also airbrushing white in areas that you want to appear brighter. I usually skip this as I've done this time.

Next step is to paint your kit. I do this with an airbrush in thin layers until it looks good. Over doing it and the pre-shading will disappear and be totally wasted. As I use acrylic paint, which dries pretty quick, I can do a thin layer and when I'm done in one end I can immediately start from the start again with the next layer.

When doing a multi colour camouflage I usually use tack for the borders as, if done correctly it will give you a non sharp edge between the colours as usually was the case in reality when they sprayed the camouflage. Not using tack but just doing the borders with your airbrush, freehand, makes the border indistinct.

This plane also had some unpainted metallic areas as the wing leading edges and the underside of the fuselage. This I masked of and painted. I also masked off and painted some panels with another shade of metallic as the different metal parts did not have the same shade.

At this stage I'm basically done with the painting. Here you'll get a feeling on how it will look like when done. This is also, basically, the last chance you have to correct any mistakes in your paint job.

For a long time my next step would be the decals. Now I'm wiser. Giving the entire kit a coat of gloss varnish has it's clear advantages. Primarily it has to do with the decals. A matt finish is matt because it uneven and thus does not reflect the light. This also means that the decals can't settle tight to the surface but there will always be a minute amount of air underneath. This usually shows in the see-through parts of the decals with whitish bubbles. So for the decals to set tight you'll need a gloss finish.

The gloss coat also helps in the next steps when it comes to next weathering method.

After applying the decals the next step is to apply some sort of wash. Many use thinned oil paint to create different effects etc. Personally I use a wash from Flory Models that is clay based with colouring pigments. As opposed to usual washes (which is diluted paint that runs into cavities and dries creating a shading effect) Flory's washes can be wiped off after they dry. This makes them easy to apply.

Here I've applied the wash over all panel lines and holes that I want to accentuate.

Next step is to take a lightly damp piece of paper towel or sponge (I use sponge) and carefully wipe off excess wash. This is where it's an advantage with the gloss coat on the model as it wipes off fine on a gloss surface as opposed to a matt surface. Wipe diagonally to any panel lines etc. will leave it there creating distinct lines. I always do a last wiping in the direction of the airflow around a flying plane thus any wash left on the surfaces looks like oil or dirt.

The advantage with the Flory washes is that if you're not happy with the result you can always wash it off the surface with excess water and it will come off totally.

Now it's time to get rid of the glossy finish. This is done by airbrushing the entire model with matt varnish. A light coat will give a semi matt appearance which looks good on most modern planes. But the more weathered the more dull they became.

Applying the matt coat also helps to blend the decals onto the surface and have them look more painted on than, well, decals.

Well that was my take on painting and weathering a kit. Next step will be to add landing gears and other stuff together with some final weathering details. I might come back to that.