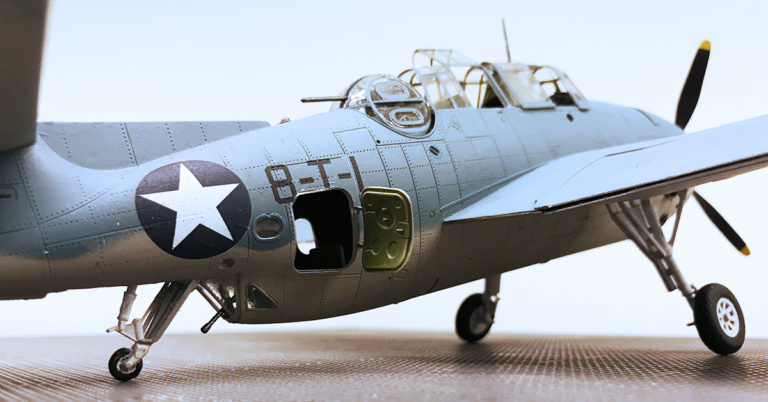 Baptism of fire - The Avenger

As described before the Americans launched their planes from Midway, some to attack the Japanese ships. These planes were sent from Midway without fighter escort as all fighters on the island had to defend the island itself (see 3. The defence of Midway - The Buffalo). First to lift off after the fighters were six Grumman TBF Avengers that had arrived from the states just six days earlier with fresh crews. They were the first operational Avengers delivered to the Navy and on their way to the carrier USS Hornet to join VT-8 (see 9. The charge of the light brigade - The Devastator). They were led by Lieutnant Fiebling and in one of the other planes, 8-T-1 (Bu. No. 00380), were pilot Albert K. Earnest (age 25), radioman Harry Ferrier (age 17) and gunner Jay Manning (age 17).

On their way out they spotted the Japanese formation on their way to Midway. Only one Zero pealed off towards them but soon lost interest. The group of Avengers were the first to arrive at the Japanese fleet at 07:10 in the morning. Almost immediately they were attacked by Zeroes. So many that Earnest got the impression that they almost got in each others ways. Manning fired back at the attacker from his rear placement but soon his turret fell silent. Ferrier climbed up to see why and found Manning slumped over the guns. "Quite suddenly I was scared, mature old man at the age of 18." he later recalled (in the official report, he was really just 17). He climbed back down only to find that the view from his gun emplacement in the belly was blocked by the tail wheel. The hydraulic system had been shot out. Soon afterwards he was wounded in the wrist and the next attack grazed his head and knocked him unconscious.

Meanwhile Earnest brought the plane down to 200 feet and opened the bomb bay doors for their torpedo. Bullets were hitting the plane continuously and suddenly something flew through the canopy and hit him in the neck. Even if there was blood everywhere Earnest could not recall any pain. Then he lost his elevator controls. It seemed certain that they were going down and there was still some distance to the nearest carrier. Earnest kicked the plane to the left towards a cruiser nearby and let the torpedo go. Following his training he then rolled the elevator tab back and suddenly the plane went upwards. He could control the hight with the elevator tabs! Still followed by two Zeroes that kept firing on them he tried to get away. The Avenger kept flying and eventually the Zeroes gave up or were called back and Earnest was still in the air. But now he was north east of the Japanese fleet which meant that it was between him and Midway. His compass was shot away but the sun was still low in the east so he decided to fly south and then turn into the sun and try to find Midway.

Using the elevator tab he regained to 3.000 feet flying south and suddenly Ferrier called over the intercom. He had regained conciousness and now joined Earnest in the back seat. After a while they turned east  and climbed over the clouds. There they could see the black smoke climbing from the three burning oil storage tanks on Sand Island. On approach to Midway Earnest attempted to lower the wheels but only the left came down. He tried several times but the right wheel was stuck. Two times he attempted to land but was waved off. The ground crew tried to call him over the radio to tell them to bail out over the island but 8-T-1's radio were shot out of action.

On the third attempt Earnest ignored the waves and set the plane down. Without any flaps with only one wheel down it rolled on down the runway until the right wing struck the ground, the plane graciously turned 270 degrees and came to a halt. Earnest was helped out of the plane by Lieutenant James P. "Jim" Muri who had just landed his badly damaged B-26 (see 7. Another freshman attack - The Marauder). Their ordeal was over but Earnest and Ferrier were the only two survivors in their flight. None of the other five Avengers returned and no torpedo hits were scored.  They were also two out of three survivors of VT-8 the ill fated battle group based on the USS Hornet (see 10. The charge of the light brigade - The Devastator). Earnest received the Navy Cross for his actions.

This kit in scale 1/48 is from Hobby Boss (kit info). The decals are original from the kit. I've written a review of the kit here.

The Midway Counter-Attack On The Nagumo Carrier Force

Previous: The sitting Duck - The Duck
Start page
Next: Another freshman attack - The Marauder