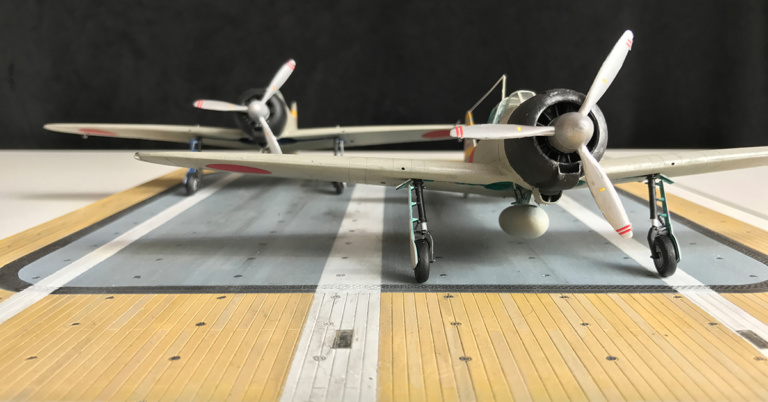 Little is known of the individual experiences of the Japanese fighter pilots in their Zeroes in the Battle Of Midway. The Mitsubishi A6M2 Zero was the type of fighters stationed at all of the Japanese carriers in the battle. It flew as air cover in the attack force that went against Midway on the morning of June 4. Nine aircraft from each carrier making a total of 36 fighters. They wrecked havoc on the defending forces as described in 3. The ineffective defence of Midway - The Buffalo. But half of the fighter strength was withheld for Combat Air Patrol (CAP) to protect the carriers.

The CAP flew constantly during the day trying to protect the valuable carriers. They had to parry the constant attacks described in the previous chapters and indeed they were successful and together with the AA-batteries aboard the ships they managed to shoot down a majority of the attackers. The first real resistance they got was when Thach applied his weave as described in the next chapter 11. The Thach weave - The Wildcat.

But then the CAP committed their fatal mistake. In their eagerness to shoot down the attacking torpedo planes they all went down to sea level leaving the skies above empty. The result can be learned in chapter 13. Hero of the day - The SBD-3 Dauntless.

Many of the Zeroes was left without their home carrier after the Dauntless attack. Many were recovered by Hiryū in the afternoon. Some took part in the attacks on USS Yorktown where some were shot down (see 17. Japanese revenge - The 'Kate'). Then came the attack that set the Hiryū on fire leaving all Zeroes flying CAP stranded in the air. They kept flying to protect what was left of the fleet but towards 19:00 they started ditching close to the remaining ships. Most of the Zero pilots was rescued by the surrounding ships but for them the fight was over for this time.

These models are in scale 1/48, one from Tamiya (see here) and one from Haswgawa (see here). I've written a review of the Hasegawa kit here.

Previous: The charge of the light brigade - The Devastator
Start page
Next: The Thach weave - The Wildcat