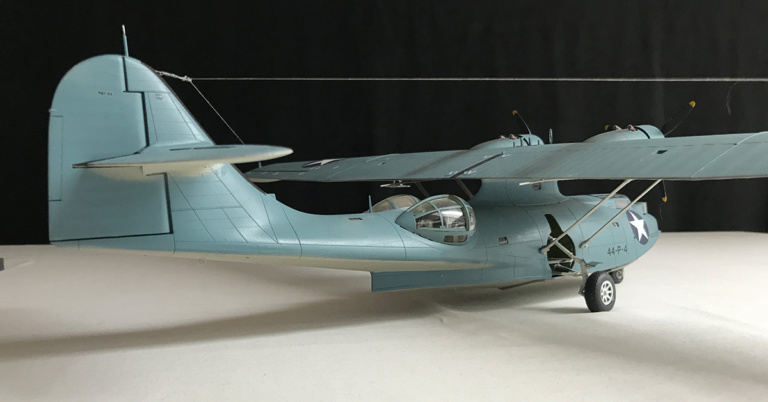 It all begins - The Catalina

Even if the American knew the Japanese were coming they still had to find them in the large Pacific Ocean. At Midway they had stationed 32 Consolidated PBY-5/A Catalinas, long range amphibious planes. At dawn on 3 June 1942 twenty-two of these Catalinas was again sent out to find the Japanese force. One of them were 44-P-4 (Bu. No. 08031) piloted by Ensign Jack Reid. When preparing the planes in the morning Plane Captain Ray Derouin had celebrated that his wife had just given birth by adding an extra 50 gallons of fuel to the planes in his charge, adding about an hour and a half worth of flying time.

Jack and his crew lifted off at 4:00 in the morning continuing westbound. They reached the end of their leg without spotting anything and the navigator Ensign Bob Swan called pilot Jack Ried and asked if they could continue. Jack said OK but to keep track on the fuel consumption. After flying 15 minutes without finding anything Bob asked for another 15 minutes which was again granted. After this Bob was ready to give Jack a heading for home when Jack sighted some specks on the horizon. Just before 9:00 a.m. Jack and his crew spotted a fleet of ships 700 nautical miles west of Midway heading east. They immediately radio this back to Midway.

Using cloud cover on and of they track the fleet for some 30 minutes recording it's strength. It was Admiral Raizo Tanaka’s Midway Occupation Force consisting of 1 light cruiser, 12 transports carrying 5,000 soldiers, 11 destroyers, 2 seaplane tenders, 1 fleet oiler and 4 patrol boats. The message triggers a force of nine American B-17 Flying Fortresses to lift off and attack Tanaka's on coming force. (see 9. Ineffective bombing - The B-17 Flying Fortress).

The American air commander, Captain Simard, ordered four PBY Catalinas from VP-24 to be equipped with torpedoes for a night attack. One of them had to turn back due to bad weather but three pushed through. At about 1:30 in the morning of July 4 they came upon the unsuspecting force of Admiral Raizo Tanaka.  During the following attack two Catalinas missed their targets but the third Catalina pilotet by Ensign Gaylord D. Propst managed to hit the oil tanker Akebono Maru with a torpedo at around 1:54 killing or wounding twenty-three men. This is the only successful torpedo attack by the Americans during the entire battle! The tanker managed to contain the damage and continued with the force.

This Day in Aviation

Previous: Background
Start page
Next: The ineffective defence of Midway - The Buffalo