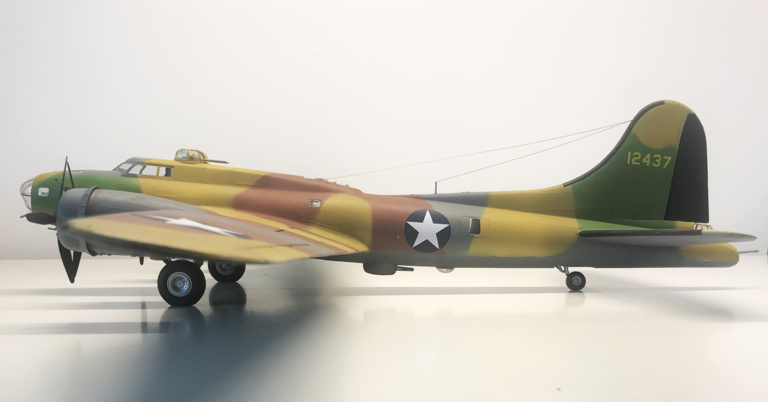 Ineffective bombing - The B-17 Flying Fortress

There was 17 B-17E Flying Fortresses stationed at Hickam Field on Midway on June 3, the day before the main battle. The first traces of a Japanese attack force was found ( see 2. It all begins - The Catalina) when the invasion force is spotted in the morning. A B-17 with extra fuel tanks and no bombs was sent out to replace the Catalina as spotter. It was considered better able to defend it self than the Catalinas as it was armed with no less than 11 guns.

The next day the B-17's were sent off right after the recognizance Catalinas at about 4:30 as a precaution as an attack on the airfield was expected. As they had to spend at least four hours in the air any way they were sent off to have another go at the invasion force. At 5:52 the Americans finally spotted the main Japanese carrier force. The B-17's was redirected towards them. They climbed to 20,000 feet (6,000 meters) and changed course. At 7:32 they spotted the first ships but did not find the carriers until 8:10 as they were hidden by clouds. Flying in from the stern the B-17's started their bomb run. AA-fire was heavy and found the altitude, but was generally behind. The Combat Air Protection (CAP) Zeroes found the hight of the bombers to high to get to them. No hits were scored by the B-17's.

On June 5 three sorties were flown bombing remaining Japanese ships. On the last sortie made by five B-17's, at 18:25, they found a lone cruiser which they attacked. The ship maneuvered violently and threw up heavy AA-fire, which was ineffective at the 11,000 feet (3,400 meters) from which the attack was made. During the bomb run one B-17 manage to lose the extra tank in the bomb room together with the bombs. They headed towards Midway but at about 23:30 it radioed "out of gas and landing" and was never seen again. The other planes had trouble finding Midway in the night but three of them was guided in by radar. The last one piloted by Captain Glen H. Kramer also ran out of gas and landed 50 miles off Midway. This time everyone but the radio operator was rescued. No hits were scored by the B-17's.

As a result of this fight it was concluded that the B-17's were better used against stationary targets than moving vessels at sea. However their worth at a long distance recognizance plane was proven. This individual plane (41-2437) was filmed by John Ford in his documentary of the Battle Of Midway and can be seen in several sequences. It had flown from Hawaii early in the morning June 4 to take part in the battle. Afterwards it was flown to Australia. On July 17 (1942) it took part in a bombing raid against Rabaul. It was officially written off June 15, 1944, and scrapped.

Previous: The attack of the hand-me-downs - The SBD-2 Dauntless
Start page
Next: The charge of the light brigade - The Devastator