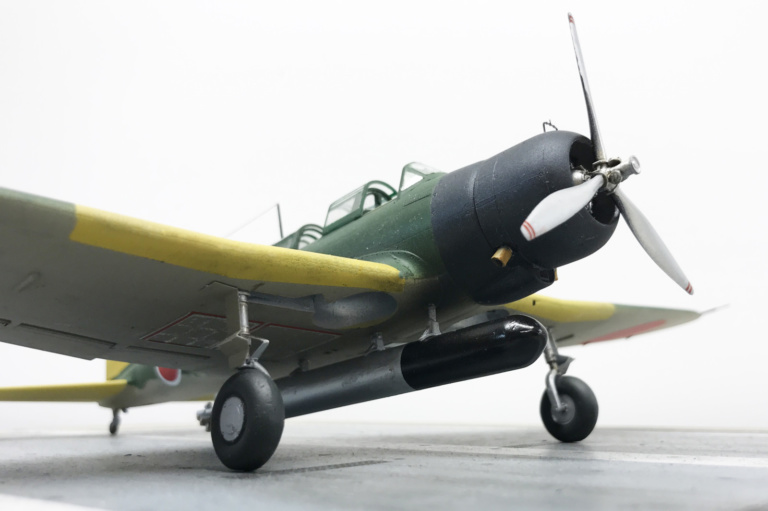 As described in 4. The attack on Midway - The 'Val' Joichi Tomonaga led the attack on Midway where his Nakajima B5N2 'Kate' left fuel tank was damaged. He managed to return to his carrier the Hiryū. Soon after they were unsuccessfully attacked by US torpedo equipped Devastators from VT-3. It was about now that the Hiryū managed to escape the devastating attacks by the U.S. Dauntlesses dive bombers that set the Akagi, the Kaga and the Soryū ablaze (see 13. Hero of the day - The SBD-3 Dauntless). They immediately launched a force of 18 Vals and 6 Zeroes to strike back at the U.S.S. Yorktown that had been detected by a recognizance plane from the cruiser Chikuma (see 14. Eyes in the skies - The 'Jake'). Their attack was met with fierce resistance and thirteen of the Vals and three Zeroes were shot down. Still they managed to score several hits in the Yorktown.

Soon after one of Soryūs Judys returned with the news that there was three American carriers in the vicinity (see 15. Surprising news - The 'Judy'). A new attack force under the lead of Tomonaga was quickly prepared consisting of 10 Kates and 6 Zeroes. The left fuel tank of Tomonagas Kate was still perforated and he was asked to switch plane. He refused stating that they needed every plane available. He simply ordered the maintenance personnel to fill up his right tank and took off fully conscious that he only had fuel for a one-way trip. Before they left they were ordered to attack one of the two undamaged American carriers. Only if they could not be found should they go for the Yorktown.

They headed towards the last point where the Yorktown had been sighted expecting to find the American carriers. Sometime around 14:00 they sighted an undamaged US carrier. It was really the Yorktown that had had such a quick repair that Tamanaga mistook it for another carrier. At 14:32 Tomonaga radioed to his group "Take position in preparation for attack formation" and two minutes later "Entire force attack!". On the way in they were attacked by two Wildcats that shot down one of the Kates before themselves being shot down by the escorting Zeroes. Closing in the AA-fire started and the rest of the American CAP descended upon them.

Tomonaga came in on the Yorktown from aft port quarter followed by a Wildcat.  It has been claimed that it might have been Jimmy Thach himself (see 12. The Thach weave - The Wildcat). Heavily damaged Tomonaga kept his course and released his torpedo against the carrier. Right after he'd done that his left wing ruptured and he crashed into the sea. His torpedo missing it's mark.

The Yorktown however was hit by two other torpedoes. One dropped by Lieutenant Toshio Hashimoto, the leader of the second group of Kates. This crippled her so much that she could later finally be sunk by the Japanese submarine I-168. The Hiryū did not escape either. Later that afternoon she was attacked by US dive bombers and eventually sunk.

This kit in scale 1/48 is from Hasegawa (see here). I've written a review of the kit, here.