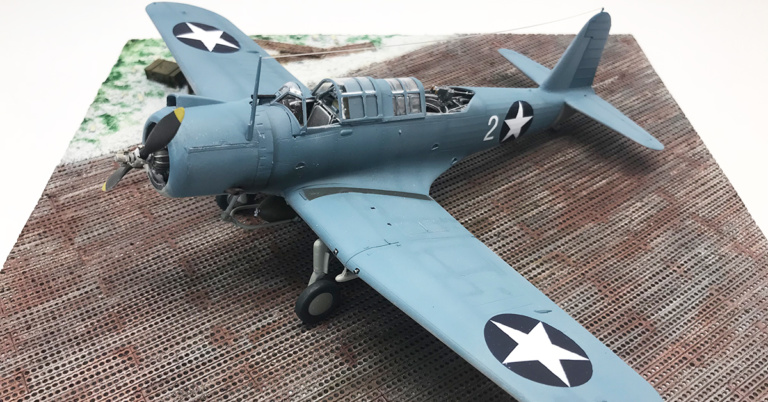 Last act of honour - The Vindicator

In December the previous year (1941) Richard E. Fleming was posted in VSMB-231 when they flew in their Vought SB2U-3 Vindicators from Ewa Field in Hawaii to Midway. The flight was 1,137 miles and they set a record for distance covered by a group of single-engined aircraft. At Midway the group was split and half of the squadron, including Fleming,  joined  VSMB-241 led by Major Henderson. In the build up before the Battle Of Midway they received 18 SBD-2 Dauntless phased out by the Navy and Fleming had been assigned one of them. They had also been reinforced by ten new pilots just ten days before the battle. There was too little time and and available gasoline to train so Henderson decided to use only glide bombing as tactics.

The attack VSMB-241 made on the Japanese fleet on 4 June has been described in 8. The attack of the hand-me-downs - The SBD-2 Dauntless. Fleming returned having done a daring bomb run on one of the carriers pulling out of the glide at 400 ft. With 179 holes in the plane and one shot-out tyre he finally set it down neatly at Midway. He then exclaimed "Boys, there is one ride I am glad is over". Fleming was only lightly wounded but his gunner, Corporal Eugene Card, was carried off on a stretcher. Their Dauntless was written off.

Fleming was then assigned one of the Vindicators, "White 2", together with the planes ordinary gunner Private First Class George Toms. They were sent off the same day in search for a burning carrier that had been reported. The unsuccessful search continued until night time fell and their Squadron Commander Norris lost his way and became separated from the others. Despite dangerous weather condition and total darkness the rest of the squadron managed to get back safely to Midway but Norris never returned.

The next morning after only four hours sleep they were sent out again in two groups, six Dauntless and six Vindicators. Fleming had been made leader for the Vindicator group after Norris disappearance the night before. This time they were sent out to find the remnants of the Japanese fleet, mainly their battleships after their carriers had been lost.

At about 7:45 one of the pilots spotted an oil slick in the water and following that they found two cruisers on their own. It was the Mogami and the Mikuma. They had been severely damaged the day before, but not by American action, they had collided with each other. The group immediately attacked the two cruisers which answered with fierce AA-fire. Fleming went into a glide run against the Mikuma but soon his plane started to emit smoke. Soon flames struck out of the aircraft. Fleming still somehow held his course. Finally he dropped his bomb at 500 ft. but then he crashed into the sea. Neither the bomb or the aircraft struck the cruiser.

Fleming was, posthumously, awarded the Medal Of Honour, the highest US military decoration. He was the first Marine pilot to receive the award in WWII. He was also the only one to receive it for actions during the entire Battle Of Midway. His gunner Toms received the Distinguished Flying Cross. The Mikuma was sunk the next day by Dauntless' from USS Enterprise and USS Hornet.

This kit in scale 1/48 is from Accurate Miniatures (see here). I've written a review of the kit, here.