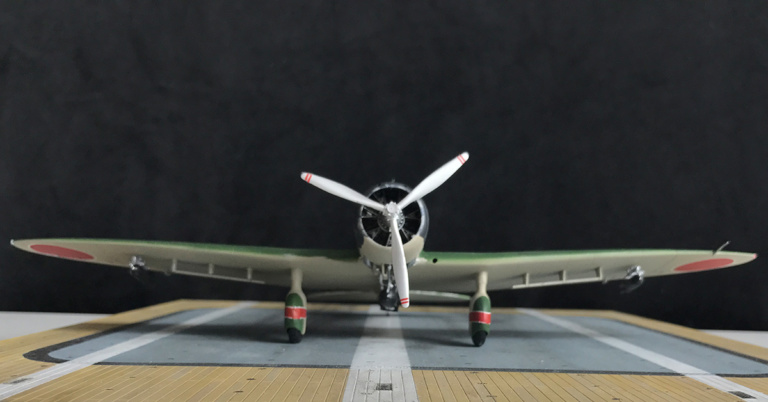 The attack on Midway - The 'Val'

Leader of the dive bombers that attacked Midway was Lieutenant Takehiko Chihaya in his  Aichi D3A1 Type 99 'Val' dive bomber AI-251 with a group of 35 other 'Val'. The whole attack force was lead by Navy Lieutenant Joichi Tomonaga in his Nakajima B5N2 Type 97 'Kate' torpedo bomber followed by another 35 'Kate'. They were escorted escorted by 36 Mitsubishi A6M Zero fighters. After breaching through the fighter defence in front of Midway (see 3. The ineffective defence of Midway - The Buffalo) they arrived to Midway at 6:20 in the morning.

First came the 'Kate's'. They were dismayed at finding their primary target, the planes at Midway, gone. The airfield was almost devoid of aircraft as the Americans had sent off it's forces to attack the Japanese fleet or generally be out of the way. They went ahead and attacked their secondary target, the anti-aircraft defences to clear the way for the D3A1 Val dive bombers. They managed to score a direct hit on three oil storage tanks on the north-eastern tip of Sand island. This sent a massive volume of oily black smoke streaming high into the air. This later acted as a guide for stragglers from the American attacks on the Japanese fleet to find their way back to Midway later in the day.

The AA fire was fierce and two of the Kate's was shot down. Tomonaga's plane also received a hit damaging his fuel tanks (remember this for later). He managed to get back to the carrier Hiryū while radioing back to Admiral Nagumo that a second air attack on Midway was needed.

Next it was time for  Lieutenant Takehiko Chihaya and the Val dive bombers. The lead Val pealed off and dove down to about 100 feet and turned upside down and proceeded down the airfield. The AA crews were astonished by this stunt and stood there staring until someone cried "What the hell, let's go at him." and opened fire downing the plane. This was the only Val shot down during the attack. The others came down dropping their bombs on the islands. One struck VMF-221's rearming pit setting of eight 100-pound bombs and 10,000 rounds of ammunition killing four maintenance personnel.

But the attack was indecisive. Only twenty men had been killed, camouflage had effectively protected the 5-inch coastal guns, and much of the damage to installations was repairable. The runways had received so little damage that the US Navy commander Captain Simard believed that the Japanese had deliberately spared them for their own use when the atoll had been captured.

After at first receiving a hot welcome by the Japanese AA-crews Chihaya landed back on Akagi fairly sizzling with indignation.“A gunnery officer who mistakes friendly planes for the enemy should be fired!” he shouted. He and his colleague Lieutenant Yamada reported to the bridge, advising that, contrary to Japanese Intelligence data, there were three air strips on the island.

This kit in scale 1/48 is from Hasegawa. You can read more facts about the kit here. The decals are original from the kit. I've written a review of the kit here.

Previous: The ineffective defence of Midway - The Buffalo
Start page
Next: The sitting Duck - The Duck