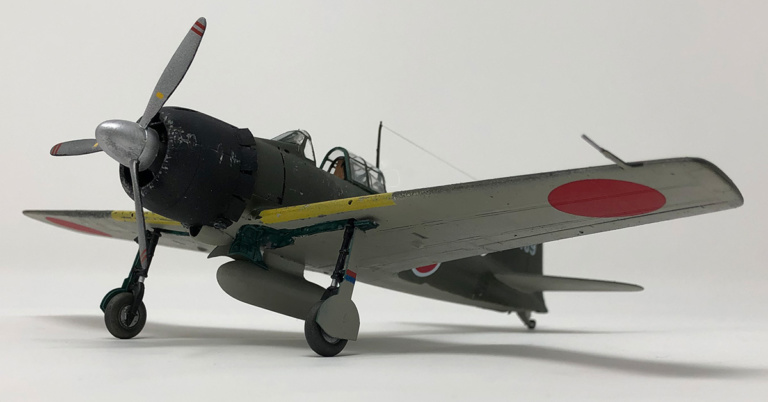 A small revenge - The Zero

Warrant Officer Kenji Yanagiya was a 24 year old fighter pilot in Kōkūtai 204 flying Mitsubishi A6M3 Zero in 1943. On April 18 he was assigned to a group of six Zeroes that would escort a flight of two Mitsubishi G4M Bettys carrying Admiral Yamamoto and entourage on an inspection tour to Bouganville. They took off at 06:00, Japanese Standard Time, from Rabaul taking position in two V-positions on the Betty's 4 o'clock about 500 m above them. They were led by Lieutenant Morisaki and Yanagiya was accompanied by P.O. 1/C Tsujinoue, F 1/C Sugita, CPO Hidaka, P.O. 2/C Okazaki. Yanagiya had been assigned plane no. 169. The weather was clear and the flight went smoothly.

After a while they could see the Bouganville island and continued to fly towards the southern end. After about 10 minutes they saw their destination, the IJN Ballale Island airstrip, and started their approach. Suddenly they saw several aircraft approaching from the direction of Shortland Island south of the airfield. They were below and they were spotted late as their green camouflage was hard to spot over the jungle. They were soon identified as American P-38 Lightnings. They dropped their extra fuel tanks and rose up to attack.

Morisaki wagged his wings and dove down to protect the transport planes. Some P-38s went straight for the Betty's while the rest tried to keep the Zeroes away. The P-38 outnumbered the escort fighters by more than 2-1 and Morisaki and his group could not keep them away from their proteges. Soon Yanagiya saw one of the Betty's crash in the jungle and the other splash into the sea. As soon as this happened the Americans turned back southwards. Yanagiya dived down towards the airfield and fired a short burst to alert them of the emergency. The base was not informed of the coming inspection, only the high officers was in the know.

Yanagiya was now agitated and set on revenge. He calculated that the Americans came from Guadalcanal and that they would cruise at low altitude to save fuel. Heading in that direction he soon found a sole P-38 flying at 12 000 feet (3 500 m). Unnoticed Yanagiya climbed another 1 000 m above the P-38 and then dived down and gave exact burst with all shells hitting the enemy. The P-38 went down towards the sea with a trail of fuel in a heavy white smoke. This was the only P-38 lost in this action.

Yanagiya and his five fellow pilots all survived the attack. They were not blamed for the loss of the Yamamoto flight as their six fighters were vastly outnumbered by the sixteen American fighters. On June 7 the same year Yanagiya's group was sent on a bombing raid on the Allied Russel Island airfield. In this action he sustained injuries to his right hand and leg. Managing to limp back to his home base he made a belly landing. He was operated and they had to remove his hand which meant he was released from active service. All the other five from Yamamoto's escort was subsequently killed in the war leaving Yanagiya the sole survivor. In shame he kept quite about the events on April 18, 1943, until a documentary writer, Akira Yoshimura, approached him and made an interview 30 years later in the mid-1970's. Yanagiya died on Feb. 29, 2008, at his age of 88.

This kit in scale 1/48 is from Tamiya (see here). I've written a review of the kit here.