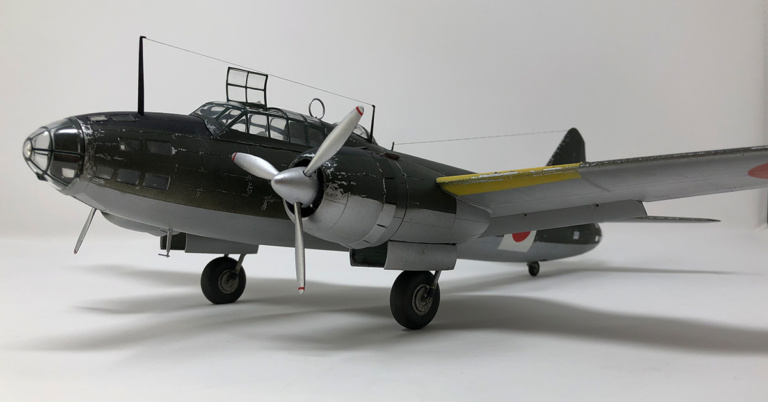 The inspection flight - The Betty

In the morning of April 18, 1943, Admiral Yamamoto boarded his aircraft, a Mitsubishi G4M1 Model11 called Betty by the Americans, in Rabaul. He flew in aircraft 323. The flight had a second Betty, aircraft 326, in which Chief of Staff Vice Admiral Matome Ugaki and part of Yamamoto's staff was travelling. They were travelling on a tour to inspect Japanese air units participating in Operation I-Go that had begun April 7, 1943; in addition, the tour would boost Japanese morale following the disastrous Guadalcanal Campaign and its subsequent evacuation during January and February.

Escorted by six A6M3 Zero's they started towards Balalae Airfield, on an island near Bougainville in the Solomon Islands, a flight of 507 km. They climbed to an altitude of 6 500 feet (2 000 m), with their fighter escort at their 4 o'clock position and 1,500 feet (460 m) higher. The flight was quite uneventful until they'd almost reached Balalae. Then suddenly a force of enemy fighters (P-38's) suddenly appeared. One of them attacked Yamamoto's plane 323 and fired into it's right engine, fuselage and tail. When he then hit the right engine the plane started to trail black smoke. The Betty rolled over and crashed into the jungle.

The day after, April 19, a Japanese search and rescue party led by army engineer Lieutenant Hamasuna found the wreck of Yamamoto's plane. The body of Yamamoto had been thrown clear of the wreckage. He sat in his chair (originally placed in the cockpit behind the pilot and copilot) under a tree slouching as in deep thought his katana (sword) still clutched in his white-gloved hand. He had been hit by two bullets, one in his shoulder and one to his head. The later had killed him so he was dead on impact.

The news of Yamamoto's death was publicised first more than a month later in Japan and came as shock to the nation. The Americans spread a cover story that civilian coastwatchers in the Solomons observed Yamamoto boarding a bomber and relayed the information by radio to American naval forces in the immediate area, to hide the fact that they had broken the Japanese code.

This kit in scale 1/48 is from Tamiya (see here). I've written a review of the kit here.

Previous: Background
Start page
Next: The hitmen - The Lightning