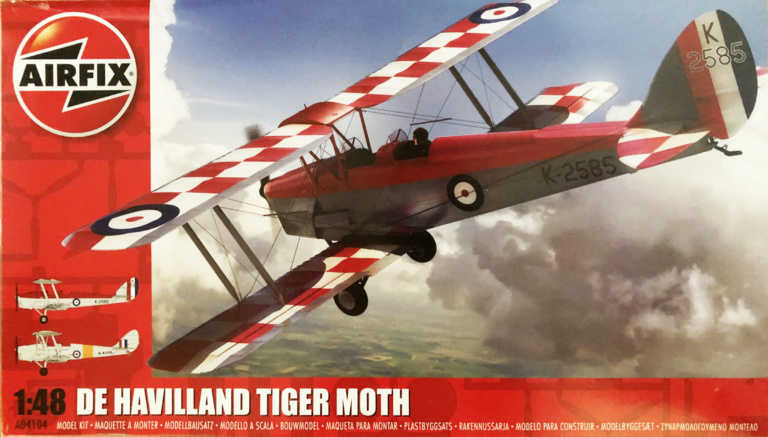 In January 2019 Airfix announced a new tool 1/48 kit of the classical de Havilland Tiger Moth. Now this made me really excited as at the time the only available kit of the Tiger Moth in that scale was a version from SMER and that left e few things to wish for. Unfortunately this kit seems to have been hit by some troubles because although first announced for a May 2019 release it has finally hit the market now in March 2020. So, let's see if it was worth the wait.

The box art is of Airfix standard, that is to say a beautiful painting depicting one of the versions you can build. Upon opening the box you will find three grey spruces in the slightly soft plastic that Airfix like to mould their models, one clear sprue, decals for two versions and the instruction leaflet.

Sprue A holds the fuselage, two different stabilisers, the tail rudder and the engine cowl. The fuselage has the engine attached so obviously you can build the kit with the engine uncovered if you like. The few panel lines are fine and not too exaggerated and the inside of the cockpit sides also have the framework moulded to it.

Sprue B holds the two main wings and two different propellers. The ailerons are moulded to the wings which came as a bit of surprise as Airfix has spoiled us with separate rudders lately. (This is also true for the stabilisers and tail rudder).

Sprue C holds most of the smaller parts. The moulding is generally good in their detailing. The wheels are made for the kit to stand on the ground which is nice. It would have been even nicer if they'd included an alternative for those that want to display it flying. (It's easier to file them flat than to mould the round.) Some parts on this sprue are really delicate and looks like they require some care when detaching.

The instructions are made in the same pedagogical way as Airfix has got us used to. A few parts at a time and the next picture clearly shows in red where the last part went. Also clear pictures to show in which angles to place things when needed. It is clear that this kit is meant to be re-released in other versions later as some parts comes different versions (like two different stabilisers and three propellers). This is good for someone that wants to build a different version than the ones included in this box.

Airfix has also made it possible to build the kit with the side covers of the engine open to display the small engine inside. A nice touch for such a small plane. They also suggest that you can cut open the side hatches to the cockpit. Personally I'd preferred if they made them detached instead of having to cut them open. Something that could easily go wrong for the inexperienced.

The last two pages of the build instructions deals with all the wiring on this double decker. And there are a few! As they state in the instructions: Note: For experienced modellers. But the instructions are very clear here too. So many times have I've had to resort to reference pictures to succeed with this but not this time. Only when it comes to the bracing strut it becomes a bit unclear.

There a two marking versions in this kit and both are for planes that are still flying today, 89 years after the type was first introduced. The first represent K-2585 (G-ANKT) finished in the colours of the Royal Air Force Central Flying School Aerobatic Team in silver and red. The decals include large red and white checkers for the top of the wings. The second version represent K-4259 (G-AMMO) whish is based at Headcorn Aerodrome. It's an over all silver finish with yellow stripes which comes on the decal sheet. Now when I attack this beaut I'll do the painting before attaching the top wing and landing gear (between step 25 and 26).

Another fine kit from Airfix and this one will potentially make many modellers happy, not only because it's a well moulded, reasonably detailed, kit with fine and clear instructions, but because it's the first new tool release of the Tiger Moth in this scale since Auroras kit released in 1959 (which has been re-released a multitude of times from different companies). It was well over due. So yes, it was worth the wait. Let's get going!