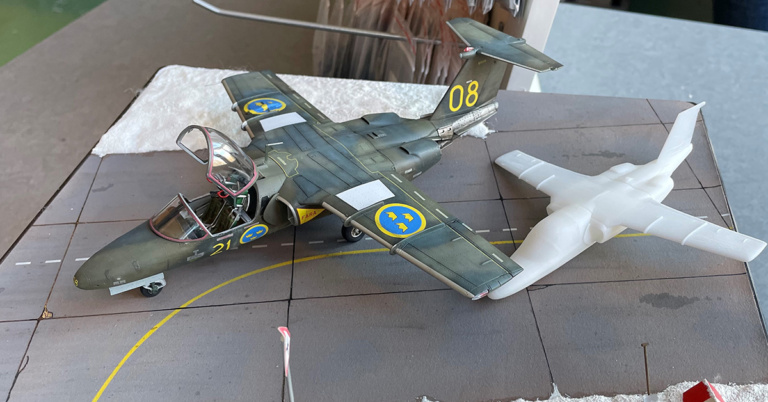 At Modellexpo 08-Open 2022 I had the pleasure of meeting Claes Wahlund, the owner and enthusiast behind Pilot Replicas. Starting with pilots and auxiliary vehicles in scale 1/48 he has since given us exquisite kits of the Saab J 21 and the Saab J 29 Tunnan. So it was with some anticipation I could ask him about his upcoming projects.

The first thing that caught my eye at his tables was a built version of the long rumoured Saab Sk 60. Claes told me that this was a pre-production test press that he built to find out if there need to be further improvements on the moulds. Corrections have been sent to the factory and he hoped that they could start production within a few weeks. As always things are a bit uncertain when it comes to these things. There's always new challenges. The production is done in Hong Kong and usually the products are transported by the Trans Siberian Railway but this possibility is now closed due to the war in Ukraine, so just the delivery times will be much longer. But still I got the impression that the Sk 60 is not that far away.

Another kit that's been in the makings for some time now is the de Havilland Venom (J 33 in Sweden). This is more down the line and Cleas told me that he also have a two-seater Vampire in the works and this seems to be closer as there was a 3D printed mock-up on the table. These are definitively two kits that are in the makings though.

Some might, like me, have been hoping for a S 29 Tunnan (the reconnaissance version) and unfortunately this is not something that's planned from Pilot Replicas. But something that Claes has in the works is a conversion kit for his J 29. He could show me a 3D print of the parts that are in the works, These are not the finished product but just a test of the drawings. It certainly looks like we can look forward to building the S 29 out of the Pilot Replicas kit after all.

It was rally good to see Pilot Replicas tables at 08-open filled great kits. At the tables there was several kits built by people that helps Claes to test-build his kits. One of them, Per-Erik Hedberg, were there showing, amongst others two J 29 Tunnan that he built of Pilot Replicas kits.

I really enjoyed the chat with Claes who, according to me, is one of the best kit manufacturers out there. Let's hope that we soon can enjoy more of his kits.