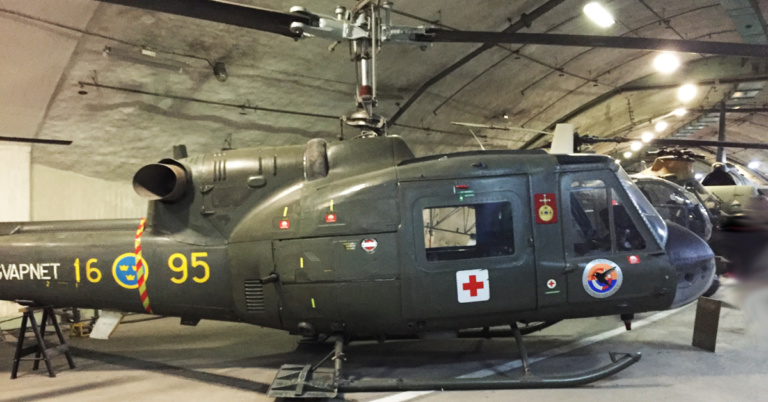 Walk around the Bell 204

This is pictures of five different (Augusta) Bell 204, more known as UH-1 Iroquois or Huey. If you want to learn more about the Bell Huey family or Bell UH-1 Iroquois at Wikipedia.

There are several base kit (with new tooling) of the Bell 204/UH-1/Huey (and it's different developments). The first released kit was from Monogram in 1959, it has the been re-released many times in different version from Monogram and Revell. The latest being from Revell in 2011. The next new tool kit came from Aurora in 1966. In 1978 Lindberg released a new tool kit followed by Starfix some time in the 1970's, the later has been re-boxed by Hema. Next addition was a new tool kit released by HobbyBoss in 2012. There is also three kits of the Bell 205. The first released by ESCI in 1980 (later re-boxed by Revell, Gunze Sangyo and AMT). The second new tool came from Italeri in 1998 (later re-boxed by Revell, Flying Kiwis, Academy and DF HeloStuff) and the latest new tool kit release was from Kitty Hawk in 2017.

If you as me want to build a Hkp 3 (Swedish Air force) you're in for a challenge. There is no kit that depicts the version Sweden used with it's jet exhaust in the right hand side (see the pictures below). So a lot of conversion is needed. Best base kit to use is if you can find a UH-1B.

Picture gallery of the Bell 204 (Hkp 3B) stored at Flygvapenmuseum, Linköping, Sweden

Picture gallery of the Bell 204 (Hkp 3B) displayed at Aeroseum, Gothenburg, Sweden