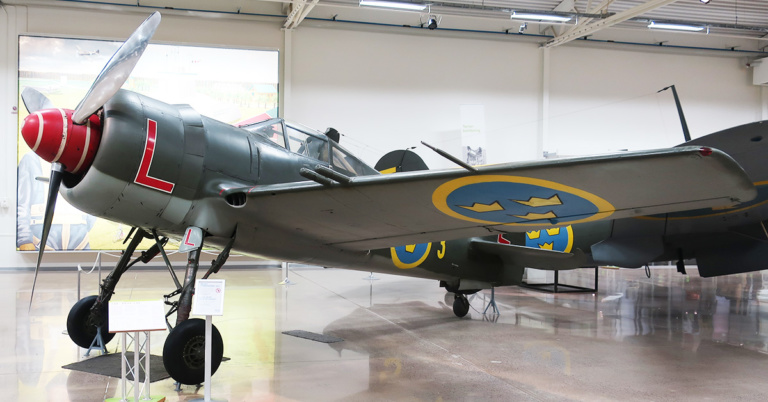 Walk around the FFVS J 22

At the start of WWII Sweden stood without a good fighter to defend it's skies. Although great efforts had been made to buy a modern fighter from abroad most efforts had failed. The ordered P-35's and P-66's from USA was stopped in 1940 the deliveries was stopped as the Americans diverted all export to Great Britain. Sweden had managed to buy some planes from Italy but they were below par. It was decided to design a Swedish fighter. Saab was at this time fully occupied by producing the Saab B 17 and Saab B 18 so a new firm and factory,  Kungliga Flygförvaltningens Flygverkstad i Stockholm ("Royal Air Administration Aircraft Factory in Stockholm", FFVS) was set up in Bromma, Stockholm. The fighter aircraft, designated J 22, was a monoplane with a plywood-covered steel airframe. Wing and fuselage layout were conventional, with the narrow-track main landing gear retracting rearward entirely within the fuselage. Power came from a Swedish copy of the Pratt & Whitney R-1830 Twin Wasp, manufactured without a license at the time, though license fees were paid later (a symbolic US$1).

The J 22 flew for the first time on 20 September 1942 and entered service in October 1943. It was well liked by it's pilots as a manoeuvrable aircraft. When tested against some P-51 Mustangs that had made emergency landings in Sweden during the war it held it's own at altitude up to 5 000 m. Above that hight the J 22 became sluggish as it lacked a super charger to the engine. In total 198 planes were built and used by the SAF. For a short while nine planes were converted for reconnaissance service equipped with a camera in the tail, these were reassigned as S 22 but was soon converted back to fighters.

There are only resin kits available in this scale. Kora released one (see here) and it's a bit uncertain if it's the same as the one released in 2017 by Planet Models (see here). Its a pure resin kit so it has it's challenges.

Picture gallery of the FFVS J 22 displayed at Flygvapenmuseum, Linköping