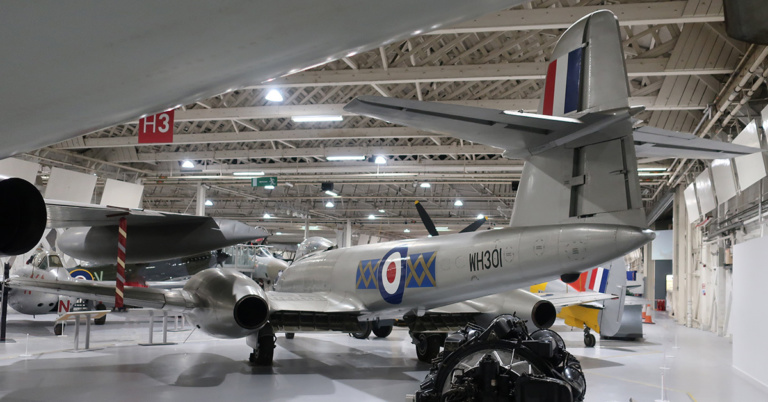 Walk around the Gloster Meteor

From Wikipedia: "The Gloster Meteor was the first British jet fighter and the Allies' only jet aircraft to achieve combat operations during the Second World War. The Meteor's development was heavily reliant on its ground-breaking turbojet engines, pioneered by Sir Frank Whittle and his company, Power Jets Ltd. Development of the aircraft began in 1940, although work on the engines had been under way since 1936. The Meteor first flew in 1943 and commenced operations on 27 July 1944 with No. 616 Squadron RAF. The Meteor was not a sophisticated aircraft in its aerodynamics, but proved to be a successful combat fighter. Gloster's 1946 civil Meteor F.4 demonstrator G-AIDC was the first civilian-registered jet aircraft in the world.

Several major variants of the Meteor incorporated technological advances during the 1940s and 1950s. Thousands of Meteors were built to fly with the RAF and other air forces and remained in use for several decades. The Meteor saw limited action in the Second World War. Meteors of the Royal Australian Air Force (RAAF) fought in the Korean War. Several other operators such as Argentina, Egypt and Israel flew Meteors in later regional conflicts. Specialised variants of the Meteor were developed for use in photographic aerial reconnaissance and as night fighters."

Building the Gloster Gladiator in 1/48?

There has been many kits released of the Meteor in this scale. AMT, Airfix, Classic Airframes and Tamiya have all their versions. The latest release is from 2016 from Airfix. It's an F.8 version and it has been re-released in different version in 2017 (F.8) and 2018 (F.9).  If you want to build an early version then there is Tamiya's F.1 version from 1997.