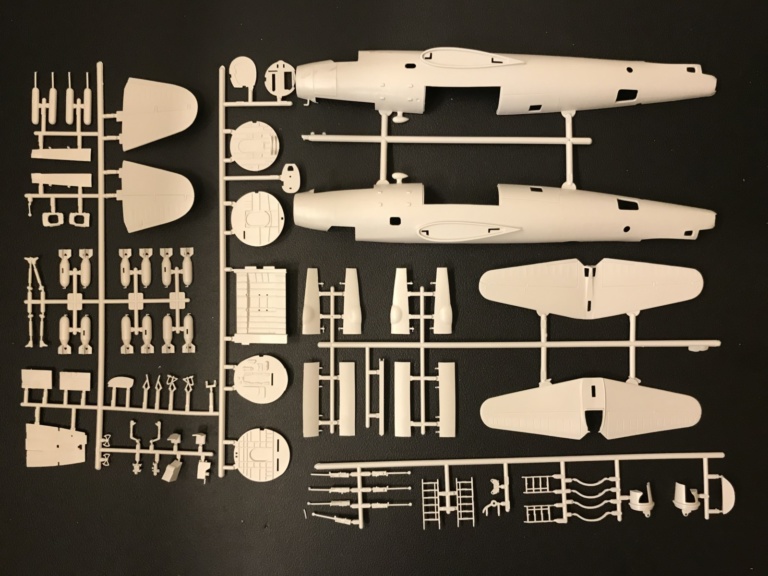 Just finished kit number nine, the Nakajima B5N2 Type 97 'Kate'. I've written a review of the kit here. This project has a tendency to grow under way. I started out with nine kits, including two Dauntless, so really eight. This was what I thought was reasonable as it was hard to find more kits of plane types participating in the battle. I was proven wrong. Since then I found the Aichi E13A1b 'Jake' the Japanese reconnaissance plane that filled an important part in the sinking of the USS Yorktown. I also managed to get hold of a B-26 Marauder and enough reference pictures and assorted decals to be able to do the build SusieQ who made a run along the deck of the Akagi. I've also realized that the Vought SB2U Vindicator was more active in the battle than I previously thought prompting me to go out looking fore one, no deal done yet but it's available. I also have a B-17 Flying Fortress but it's a B-17G and the ones on Midway was B-17E and to do that I'd need a conversion kit. This is not as readily available. 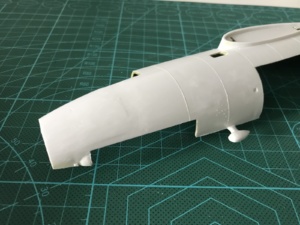 The Marauder at Midway

I've just started the kit that will become SusieQ. Got it in the mail yesterday after it had made a turn in the customs office.  I had already bought paint masks, photo etched parts and assorted decals for it and had them waiting. Unfortunately there is a shortage of reference pictures of the actual plane. The only picture I found is of a metal plate with the text "SusieQ" that was cut out of the wreck. So I know how that looked like. But I also found a concurrent picture of a B-26 at the Aleutian Islands equipped with a torpedo. So I will use that as a paint reference and guide to place the serial numbers etc.

Fortunately the torpedo on this B-26 looks a lot like the extra torpedo that was included in the Devastator kit. I also have to file away a few things from the fuselage from the kit that was not on the Aleutian plane. It had no forward guns on the fuselage and there's an extra armour plate on the pilot side that needs getting rid of. There is several drawings of the SusieQ but it's clear that the lack of reference pictures has opened the field for artistic freedom. Just the placement of the serial number differs from the tail fin to the fuselage. But the Aleutian picture helps. But weather the plane had the 'U.S. ARMY' text under the wing or not is an open question.

I also soon discovered that Esci's Marauder kit is not a reboxed version of Mongrams/Revells kit as I thought. This means that not all etched metal parts from Eduard will fit my kit. 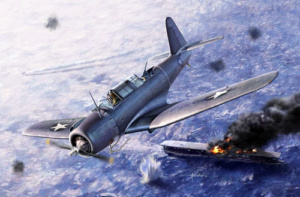 There has been some really expensive Vindicator kits on Ebay but lately two kits have shown up at https://www.hannants.co.uk. Available today is Azur's Vought V-156F Vindicator 'French Navy' but even if it's based on Accurate Miniatures "Marine Corps Bomber SB2U-3 Vindicator
VMSB-241, Battle of Midway" it has new parts so I'm a bit uncertain. At the same time Hannants has also announced a "Vought SB2U-3 Vindicator Battle of Midway" from Academy but it's listed as Future Releases with no date. So I'm in two minds how to act here. One thing is clear though. The Vinidactor is in the project as of now.

Then we have the B-17 Flying Fortress. They were based at Midway and made several unsuccessful bombing runs on the Japanese navy. The only snatch here is that the available kit in 1:48 is a B-17G and the ones at Midway was B-17E. There's many small differences like the belly turret, the front glass etc. A bit too much for me to scratch build. There was a conversion kit from Koster Aero Enterprises but it's not available anywhere. It still looks like the B-17 will be out of the race.

When it comes to the Dauntless I have two kits, one SBD-2 and one SBD-3. The older SBD-2 was based at Midway and had an active role during the battle but the SBD-3 that were based on the carriers were really the ones that saved the Americans bacon. My initial thought was to just build one of each aircraft type in this project but now I'm starting to ponder weather I should do both Dauntless anyways. The SBD-3 I'm planning for the grand finale. It has a lot of extras to the kit and it was the SBD-3's that sealed the fate of the Japanese carriers so it will be the perfect kit to end the project with. But Maybe I should push in the SBD-2 before that? Choices, choices.