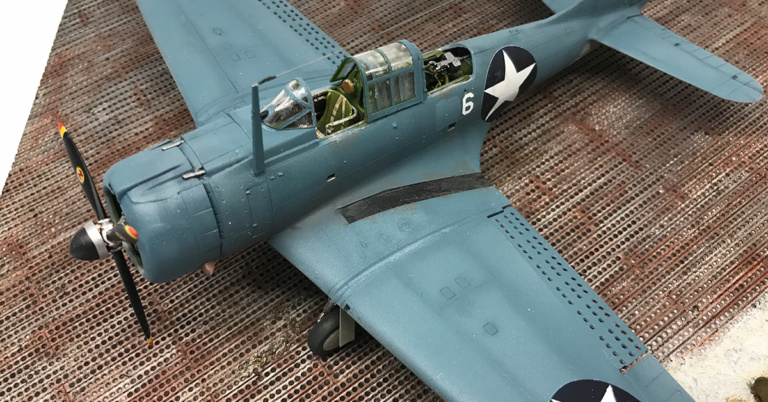 The attack of the hand-me-downs - The SBD-2 Dauntless

Right after the Avengers and Marauders had taken off from Midway it was finally time for the Marine Scout-Bombing Squadron 241 stationed at Midway. This group was equipped with older dive bombers retired from carrier service. They were divided into three groups, Major Henderson's with nine SBD-2 planes, Captain Tyler's with nine SBD-2 planes and Major Norris' with twelve SB2U-3 planes. Two Dauntlesses had to stay behind due to engine troubles and one Vindicator returned soon after start when an engine cowling blew off. The destinies of a SB2U-3 Vindicator will be covered in a later in 17. Last act of valour - The Vindicator.

In Major Henderson's group were SBD-2 No. 6 (BuNo 2106) flown by 1st Lieutenant Daniel Iverson and also manned by the radio/gunner Marine Private First Class Wallace J. Ried. When the force had gathered in the air they took course for the Japanese fleet with Henderson in the lead.

At 7:55 they sighted the enemy fleet just to port of their course. Closing in they were jumped from above by the Japanese Zero fighters on combat patrol. Henderson kept his squadron intact in the attack but was then seen crashing into the sea. Iverson's radio was out of action and in addition they even lacked intercockpit communication. No attack signal was made. At 1500 feet he therefore selected a carrier to attack and pealed off to attack immediately followed by two enemy fighters. After releasing his bomb at 300 feet amidst fighter fire and heavy AA-fire he pulled out at sea level only to find that the two Zeroes had got company by another two. These continued to chase them for twenty to thirty miles taking turns to try to shoot them down. Finally Iverson and Ried gained hight enough to reach the relative safety of the clouds and escaped the enemy fighters. Nurturing the damaged plane they set off back towards Midway.

Back at Midway Iverson found that the left gear wouldn't come down. The air speed indicator was shot out of commission and they had no hydraulic power. Still Iverson landed the machine down in the middle of the runway and managed to avoid a number of parked B-17 Flying Fortresses. Iverson was wounded in the legs and face and Ried in a foot but none worse than that they could participate in the actions the day after. Their plane however was riddled by some 200-250 new holes. Iverson received the Navy Cross and Ried was awarded the Distinguished Flying Cross.

Had it been later in the war the plane, BuNo 2106, would have been written off but now it was repaired and put back into service as a trainer back in the U.S. On June 11, 1943, 2nd Lieutenant Donald A. Douglas was practising carrier landing on the U.S.S. Sable in Lake Michigan when he came in to slow and to low. He was waved off by the landing signal officer but when he applied power the engine coughed and he pancaked in the drink. Douglas was quickly rescued but BuNo 2106 sank to the bottom. There it stayed until 1994 when it was salvaged and subsequently restored. It is now displayed at the National Naval Aviation Mueum in Pensacola, Florida.

Previous: Another freshman attack - The Marauder
Start page
Next: Ineffective bombing - The B-17 Flying Fortress