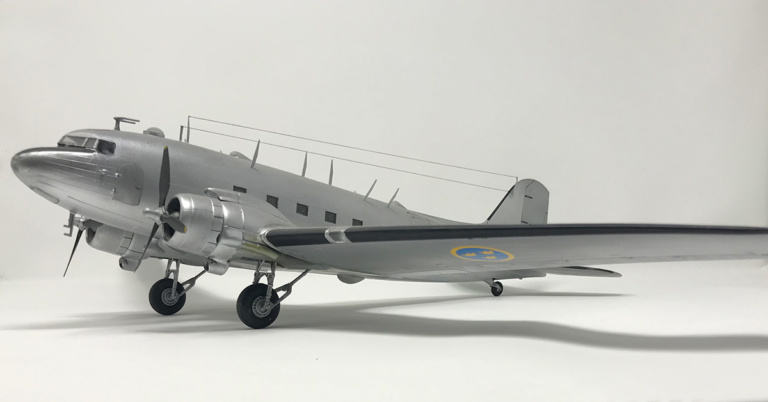 The DC-3, one of the more iconic planes in history, was developed as a sleeper version of the DC-2 and it's first designation was DST (Douglas Sleeper Transport). It first flew in December 1935. It's fuselage was wider to accommodate the sleeping berths. Almost directly it was followed by a 21 seat version called the DC-3. It quickly became a popular plane transporting people over the U.S. When WWII started it was soon pressed into service, then as C-47. The C-47 was modified from the civilian service, amongst the changes was large cargo doors on the left side and a glass dome on to of the fuselage. More than 10,000 C-47's were built during the war. A great number of these were converted for civil service around the world after the war. The C-47 made service in some 100 countries air forces.

In 1937 the Swedish ABA (AB Aerotransport) bought some DC-3's to fly on international lines. During WWII they continued to fly them as courier planes to the UK. In 1943 two of these were shot down by the Germans. After this the flight halted for a while but after negotiating free passage with the Germans and the British the flights were restarted but then with large letters clearly stating "Sweden" on the planes and always with their lights on.

After the war the Swedish Air Force acquired some 8 C-47's and operated the type between 1949 - 1984 under the code Tp 79, Tp being Transport. The first two planes were converted for radio reconnaissance and used to pick up radio signals over the Baltic Sea listening in on the Soviets. On June 13, 1952, one of them, nick named Hugin, was shot down by the Russians over international waters. In spite of extensive searches the plane was lost and many theories about what had happened to it lived for a long time. Finally, on June 10, 2003, she was found east of Gotland. The plane was salvaged and is now on display at Flygvapenmuseum (Air Force Museum) in Linköping, Sweden.

The Tp 84 was retired from the Swedish Air Force in 1984. Three (or four counting the wreck of Hugin) of the planes are still in Sweden. One is on display at the old Parachute regiment in Karlsborg, one is in the collection at Flygvapenmuseum (Air Force Museum) in Linköping (in addition of the wreck of Hugin) and the last is kept in flying condition by Flygande veteraner (Flying Veterans), a non-profit association. In connection with SAS's 40th anniversary they sponsored the plane and it was painted again as it look like when it was in SAS service.