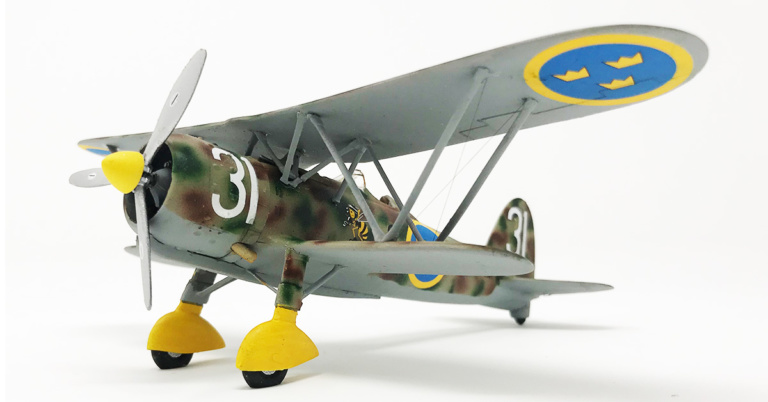 Back to the background project

Having done the Battle Of Midway 75 Years project I'm temporarily back to my never ending background project, building planes used by the Swedish Air Force. I have a couple projects connected to the Midway project on the shelf, sort of prequel and sequel. It's Doolittle's B-25 from the Doolitle-raid (prequel) and the planes from the Bouganville-raid where they killed Admiral Yamamoto. But I'm done with the Pacific for a while so I'll return to those later.

I've been building kits of Swedish planes since I was young but in recent years I've become more focused. I have a collection of some 25+ on built at the moment and some 10+ unbuilt in my stash. My latest are the Fiat Cr.42 (J 11 in the SAF, kit in scale 1/48 from Classic Airframes) and the Grunau Baby IIB (Se 102 in the SAF, kil in scale 1/48 from Fly).

The Heinkel is a tough kit with a few challenges (it's not the most well done kit) so it's actually resting for a bit. The Bulldog is waiting for some after market stuff I ordered last week. But I'm also eagerly awaiting the release of Tarangus new Saab B 17 that is due in march. It's never been released in scale 1/48 so this will be great. Also Airfix announced a new tooling of the De Havilland Tiger Moth in scale 1/48 due later in 2019. It served as a school plane in the SAF.

So, plenty of things to build for the SAF. But at the same time I'm preparing to start Tamiya's Grumman F-14A Tomcat in scale 1/48. This one I'm going to spend some time on. I've ordered a shit load of after market stuff to this one and a carrier deck diorama base and tow tractor to display it with. This is going to be fun. (And, yes, the Hawker Typhoon in scale 1/24 is still there, a slow project).