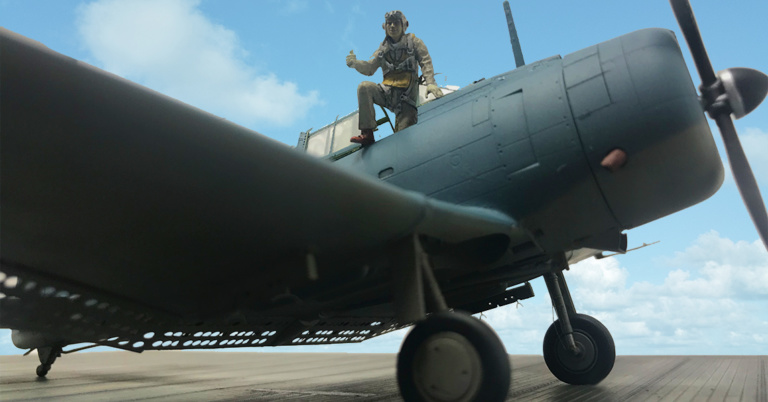 Hero of the day - The SBD-3 Dauntless

In the morning of June 4 the two U.S. carrier forces, Task Force 16 with the U.S.S. Enterprise and the U.S.S. Hornet and Task Force 17 with U.S.S. Yorktown, started to launch their attack against the Japanese which was now confirmed in the area. Hornets attack force under the lead of Commander Stanhope Ring went on a fools errand on a still unexplained erroneous course way north of the Japanese fleet loosing many planes and crews to fuel shortages. Only their torpedo force VT-8, who broke away from the main force after half an hour, managed to find the Japanese as described in 10. The charge of the light brigade - The Devastator.

Meanwhile the dive bombers from Enterprise and Yorktown started to search for the Japanese. They headed towards the expected position of IJNs carriers but they had, unbeknown to the Americans, turned north east towards the U.S. carriers and valuable fuel was lost to try and find them. In the formation led by Lieutenant Commander Wade McClusky was Lieutenant Commander Richard Halsey "Dick" Best leading VB-6. When they didn't find the enemy force they finally turned north west where they spotted a lone Japanese destroyer steaming at full speed north east. It was the Arashi that had been assigned to suppress the American submarine Nautilus who had tried to attack the Japanese carriers earlier. It was now heading back towards the main force. McClusky guessed this and headed off in the same direction ending up right over the Japanese main force as it was being attacked by VT-3's Devastator torpedo planes. As the Japanese Combat Air Patrol (CAP) was down at sea level shooting down the torpedo planes the sky above was clear.

During their flight towards the Japanese one of Best's men had run out of oxygen so they had gone down to 15,000 feet putting VB-6 below McClusky's  VS-6. According to the current doctrine the leading group should go for the target furtherest away and the second against the closest. So Best prepared to dive toward the nearest carrier, the Kaga, and started to open his dive flaps when suddenly McClusky, a former fighter pilot, came screaming down in front of them breaking the doctrine. Best's VB-6 followed but realizing the serious mistake Best managed to break away together with two of his wingmen, Lieutenant Edwin John Kroeger and Ensign Frederick Thomas Weber. They continued towards the second carrier the Akagi.

They commenced their attack still unopposed but soon Akagi's AA-guns went into action. But it was too late. They went into a loose V-shape towards the turning carrier. The first bomb missed it's target by merely 10 meters sending a plume of water over the bridge. The third bomb also narrowly missed to the aft of the carrier damaging her rudder. But the second bomb, the one dropped by Best, hit Akagi's flight deck just aft of the middle flight elevator. The 1,000-lb bomb penetrated the deck and exploded on the upper hangar deck setting fire to the B5N2 Kate's being readied there. This doomed the Akagi.

The rest of VB-6 and VS-6 had put the Kaga on fire with a 1,000-lb and at least three 500-lb bombs. Meanwhile Dauntlesses in VB-3 from the U.S.S. Yorktown had arrived from a different direction and started to attack the Sōryū and scored no less than three hits with 1,000-lb bombs setting her too on blaze. Of the four Japanese carriers at Midway Hiryū was now the only left in operation. Some of the Dauntlesses from VB-6 and VS-6 managed to make it back to U.S.S. Enterprise with the little fuel they had.

In the afternoon they were off again with the Dauntlesses that was still operational. The force was lead by Lieutenant Commander Wilmer Earl Gallaher in VS-6 with six Dauntlesses, Best lead VB-6 with four planes and they were joined by fourteen Dauntlesses from VB-3. VB-3 had been diverted to Enterprise after Yorktown had been hit (see 17. Japanese revenge - The 'Kate'). This time they found their target, the Hiryū, directly. This time the Japanese were prepared so they were immediately attacked by the CAP and what was left of the fleet opened up with all the AA they had. The first bombs from VS-6 missed their target. As Best prepared to attack with VB-6 he was for the second time this day cut off, this time by planes from VB-3 who had broken off their attack on their designated target, the battleship Haruna, to attack the Hiryū when she had escaped the first attack. They too was unsuccessful. Now Best and his group attacked. This time they hit. Hiryū was hit by four 1,000-lb bombs, one of them came from Best. The carriers fate was sealed.

The rest of the planes tried, unsuccessfully, to attack the remaining battleships. Just as they were done another group of Dauntlesses appeared. It was the remnants of U.S.S. Hornet's failed mission earlier in the morning. Those that had made it back to Hornet had been refuelled and rearmed just to arrive too late for the real action. They also made unsuccessful attacks on the battleships.

Dick Best had during his first mission breathed oxygen contaminated with caustic soda. The day after he started to cough blood, the gas fumes had activated a latent tuberculosis. Best was treated for 32 months at military hospitals and was then retired from service in 1944. In his last day of action he had mortally struck two different enemy carriers earning him a Distinguished Fly Cross and a Navy Cross. Speaking with good humour about the day on which he participated in the sinking of two Japanese fleet carriers at Midway and ended his career as a Navy pilot, Best commented : "You couldn't end a career better than that in 30 or 40 years!". After the war he headed the security department at Rand Corporation until his retirement in 1975. He died in October 2001 at the age of 92.

The kit in scale 1/48 is from Hasegawa (see here). I've written a review of it here.

Previous: The Thach weave - The Wildcat
Start page
Next: Eyes in the skies - The 'Jake'