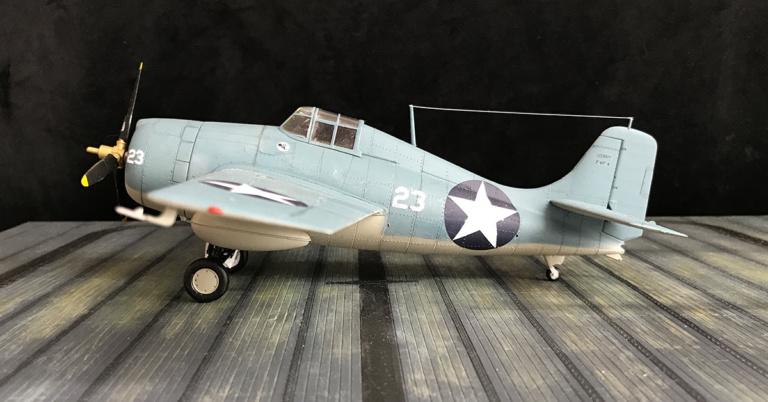 The Thach weave - The Wildcat

John S. "Jimmy" Thach had been in the Navy since 1927 becoming a Naval Aviator in early 1930. He had been a test pilot and instructor. In 1940 he was placed in command of Fighting Squadron Three (VF-3) flying F4F Wildcat. Learning of the manoeuvrability of the Zero he realized that the current US fighters tactics was no good against this new formidable enemy. He had therefore developed a tactic he called the beam defensive maneuver. But he had not got the chance to test it before the Battle Of Midway.

On June 4 VF-3 was stationed at USS Yorktown. Thach was assigned to go with the attack force against the Japanese fleet with six Wildcats. They would be the only American fighters to accompany any of the US attacks this day. It had been decided that Thach and his group would follow and protect VT-3, Yorktown's torpedo bombers. The attack force from Yorktown was sent out later than those from Hornet and Enterprise but they arrived at the Japanese fleet just 30 minutes after the attacks by VT-8 (see 10. The charge of the light brigade - The Devastator) and VT-6.

Staying down with the Devastators in VT-3 they were directly jumped by the Zeroes in Combat Air Patrol (CAP). Some 20 Zeroes went for the six Wildcats, almost as many went down on the torpedo planes. Almost immediately one of the Wildcats went down in flames. Thatch tried to practice his beam defensive maneuver but one of the pilots was new to the group and not informed about it and on top of that his radio was not working. Rearranging his flight he told one of the other pilots to take lead in the second wing and things started to work. One Zero following one of the Wildcats missed his first shot and slowed to do a second try when Thatch slid in and shot him down.

The beehive continued but the Zeroes could not get at them without risk. Thatch shot down another two and a wingman downed another and the five Wildcats was still in the fight. However they were kept busy and unable to help the Devastators. 11 of the 13 planes in VT-3 was lost. It was at this point the dive bombers arrived (see 13. Hero of the day - The SBD-3 Dauntless). After that the Zero attacks subsided and Thach and the other four planes remaining in VF-3 could return to Yorktown. Back at their carrier they flew as CAP trying to defend it against the Japanese attacks (see 17. Japanese revenge - The 'Kate').

In total VF-3 was credited with 33 enemy aircraft shot down to go with 11 probables and six enemy aircraft damaged during the Battle Of Midway. This was by far the best performing fighter group during the battle. The beam defensive maneuver was proven for the first time in battle. Later, in an action report from the Battle Of Santa Cruz Islands, commander James H. Flatley named the maneuver the Thach Weave. It was broadly implemented during WWII and the maneuver proved so effective that American pilots also used it during the Vietnam War, and it remains an applicable dogfighting tactic today.

The kit is from Tamiya in scale 1/48 (see more). I've written a review of the kit here.

Flying into a Beehive: Fighting Three at Midway

The Battle of Midway and the Debut of the Thach Weave

Previous: Combat air patrol - The 'Zero'
Start page
Next: Hero of the day - The SBD-3 Dauntless