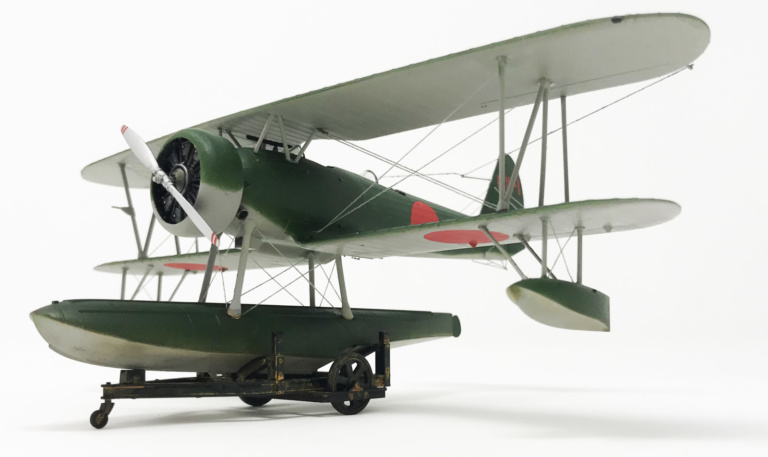 By the afternoon the Japanese knew there were more than one American carrier in the vicinity. But how many? They launched several scout planes. Except for the Jakes (described in 14. Eyes in the skies - The 'Jake') and the Judy (described in 15. Surprising news - The 'Judy') it also meant sending out five Nakajima E8N2 ‘Dave’ from the tender Tone and battleships Haruna and Kirishima. These were slower and had shorter range than the other scouts but now every resource was needed. Amongst others was No. 1 aircraft from the battleship Haruna.

Just as reports came in to Rear-Admiral Yamaguchi onboard the Hiryū about the Tomonagas  attack on the Yorktown (see 17. Japanese revenge - The 'Kate') they received a message from Haruna’s No. 1 scout. He was under attack by American fighters and suspected that there were carriers close by. The No. 1 scout was now considered lost as an E8N2 hardly was a match to the American Wildcat fighter.

The unnamed pilot aboard No. 1 however turned out to have superb airmanship. By manoeuvring his plane probably using his slowness to his advantage he managed to avoid the American fighters. Fortunately there was some clouds this day so he finally managed to shake his attackers. Limping back to the Japanese fleet he managed to make his way back to the Haruna. However his observer/gunner had been killed and the E8N2 would never fly again.

This kit in scale 1/48 is from Hasegawa (see here). I've written a review of it's sibling kit, the E8N1 which is basically the same kit, here.