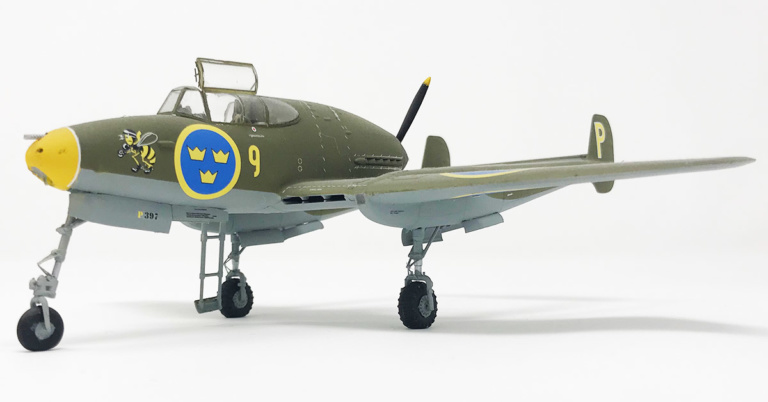 During WWII Sweden put a lot of effort into building a strong air force in case they should be dragged into the war. Saab started developing an unorthodox fighter with a push engine, a Daimler-Benz DB 605B license built in Sweden. It was the same engine that was used in the Messerschmitt Bf109, Bf110 and Me210 and also in the Italian Macchi C.205, Fiat G.55 and Reggiane 2005. The unorthodox design with the propeller behind the pilot also prompted Saab to develop the first ejection seat. However they didn't patent the idea leading to a lengthy fight with the British manufacturer Martin Baker which patented first.

The first prototype made it's maiden flight on July 30 1943 with Saab's test pilot Claes Smith at the controls. The Saab 21 got the Swedish Air Force code J21 , J being Jakt (Fighter). The first operational J21's was delivered in December 1945. F 8 and F 9 air bases was equipped with the J21A, later also F 12 and F 15 received the type. Although designed as a fighter the aircraft was often used in an attack role with bombs and rockets. Later F 21 received A21's, A being Attack. It was the only air base that operated this version.

Saab 21 became one of only two propeller aircraft types that was converted to jet propulsion. After the war the world quickly converted to jet planes and not wanting to get behind Sweden decided to try to convert the Saab 21 with the British Goblin engine. They received the code J21R (R for reaktionsmotor, reaction engine). Practical experience showed that the plane became unstable at fight at high altitude but on the other hand it was well suited for the attack role therefore half of the converted planes was converted to A21R.

The Saab 21 had a relative short service life as it was soon replaced by the de Havilland Vampire (with the Swedish Air Force code J28). The propeller version was retiring by 1954 with the jet version holding on until 1956. There's only three Saab 21 preserved to this day all A21A versions, but one was converted to the jet version in the 1990's by voluntary enthusiasts. These are the three: