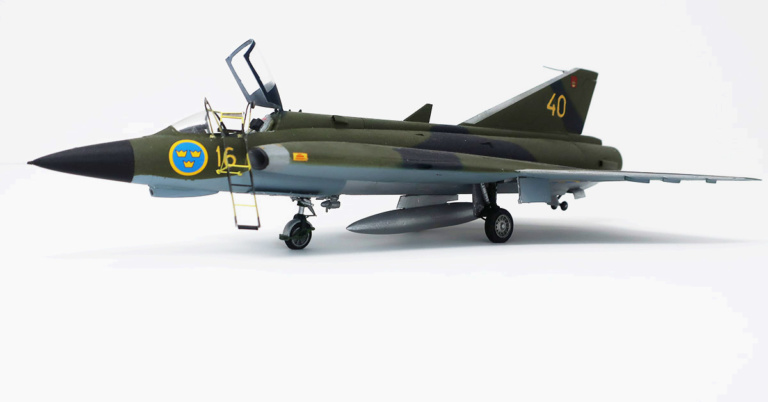 In the 1950's the Swedish Air Force was looking for a replacement of their current fighters the Saab J 29 Tunnan, the Saab J 32 Lansen and the J 34 Hawker Hunter. The replacement should be a supersonic fighter with good climbing rate and armament to meet new high altitude bombers. Under the lead of chief engineer Erik Bratt Saab started the development of a new double delta fighter. The prototype was built in a smaller scale (1/√2 or ca 71 %) and called Saab 210 and the tests were successful. In October 1955 the first full scale prototype flew and the plane got it's S.A.F. code J 35, J for Jakt (Fighter). Deliveries of the first J 35A's to the Swedish Air Force started in late 1959. By then it had got it's name Draken. The name in Swedish means kite and it was given it because of it's shape. The same word also mean dragon which would be suitable but it's not for this meaning it got it's name.

The J 35 turned out to be a good interceptor but it also turned out that it had unexpectedly good dog fighting capabilities. During exercises it often operated from temporary road bases in the Swedish road network, a way to quickly disperse the air forces from the larger air bases that was potential targets of an enemy attack. A double seat version was developed with S.A.F. code Sk 35, Sk for Skolning (training) and later a reconnaissance version, the S 35, S for Spaning (reconnaissance). The J 35 soon became the main stay fighter in the Swedish Air Force and the type was upgraded in several versions until it was finally retired in late 1998.

The Saab 35 Draken also became a quite successful export product for Saab doing service in the Danish, Finnish and Austrian Air Forces. In Denmark the plane was used as a ground attack aircraft. They also bought the reconnaissance and trainer version. Finland used the plane as an all weather fighter. Due to restrictions agreed after WWII Finland was not allowed to own more than 60 fighting planes but trainers were allowed so they also bought the trainer version of the Saab 35. Austria bought refurbished Saab J 35D renamed to J 35Ö in 1988.  They also had restrictions since WWII preventing them to use robot armament so they used external gun pods. After the Yugoslavian Air Force had violated Austrian air space in the beginning of the 1990's the ban was lifted and the planes got American Sidewinders. Austria was also the last country using the Saab 35 militarily when they retired their last Draken in 2005. In the United States however there was six Saab 35 bought from the Danes that operated at the National Test Pilot School until 2009.

There are many Saab 35 Draken preserved on display but also some in flying condition. Wikipedia has a list of surviving planes.