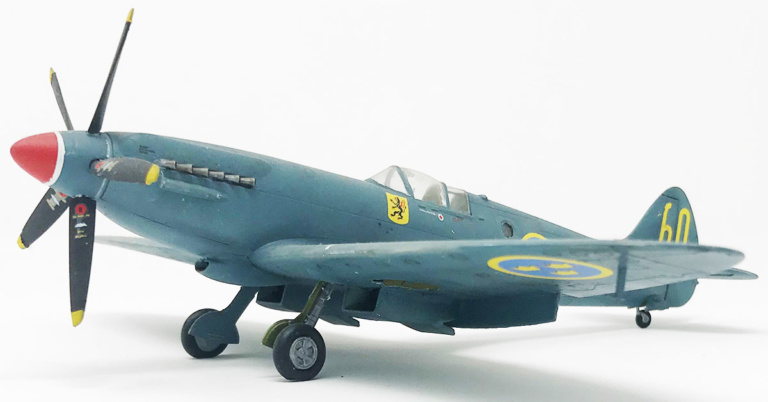 Probably the most iconic aircraft ever, the Supermarine Spitfire. Developed in the mid 1930's with a Rolls Royce Merlin engine by Reginald Mitchell. The first planes entered service with the RAF just the year before the start of WWII. It earned it's fame during the Battle of Britain when it, together with the Hawker Hurricane, fought off the Luftwaffe. It was continuously developed during the war and used in all theatre of wars.  In the later part of the war it received the Rolls Royce Griffon engine which had better performance. During it's active years it saw service in some 30 different air forces.

In 1948 the Swedish Air Force bought fifty Spitfire PR Mk.XIX, the reconnaissance version. In Sweden it received the code S 31, S for Spaning (reconnaissance). They were all based at F 11 air base in Nyköping, Sweden, where they made service until 1955 when it was replaced by Saab S 29 Tunnan. On several occasions during 1949 the pilot Ingemar Wängström flew his Spitfire on secret photo missions over Soviet, amongst other targets he photographed was the Russian navy base at Murmansk. He was always dressed in civil clothing and equipped with false identity papers. However he managed to avoid detection and always returned back home.

There are many Spitfires left in the world and many in flying condition. Of the Swedish Spitfires there is non left however. Flygvapenmuseum (Swedish Air Force museum) managed to trade in a Spitfire Mk.XIX that is now restored as a Swedish S 31 and on display at the museum.