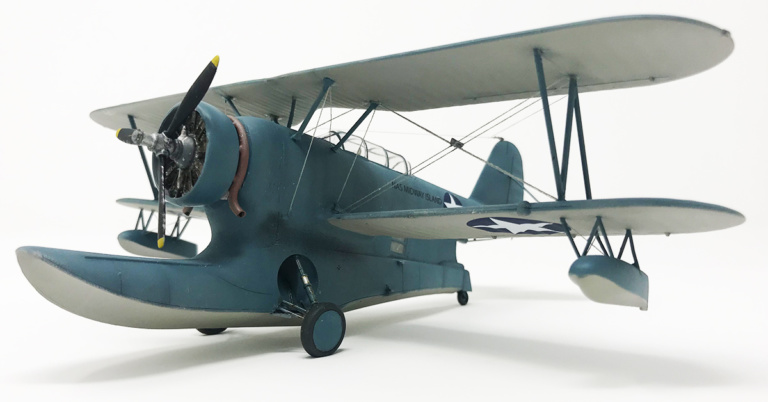 The sitting Duck - The Duck

In the morning of July 4 the island awoke early prepared for the oncoming Japanese attack. As soon as reports came in that the enemy was approaching all available pilots took to the air, either to attack the Japanese fleet or to defend the island (see 3. The ineffective defence of Midway - The Buffalo). However one damaged B-17, ten SBD-2 Dauntless and one J2F-2 Duck was left behind due to pilot shortages or engine problems. The J2F-2 Duck with Bu. No. 1209 was assigned directly to the station as a liaison and rescue aircraft. Issued to the Navy in 1938 it was now in the middle of the Pacific doing service as a general utility plane.

The Japanese started to bomb and strafe the base at 6:20 as described in 4.The attack on Midway - The 'Val'. The Catalina's hangars was struck and the oil depot on Sand Island was set on fire sending up a thick pillar of smoke. Miraculously only two of the 10 SBD-2 planes were damaged and not beyond repair. The B-17 also escaped serious injuries beyond the already burned out engine, it was later flown back to Hawaii for repairs. On the airfield they had constructed a mock-up plane of scraps and left-overs, that got a direct hit from a bomb.

However during their strafing rounds the Japanese attacked and set fire to the Duck. It caught fire and burned out totally, there was no saving this plane. It was thus the only plane, on the ground, that the Japanese managed to destroy. We have to admit that to the Japanese it must have been like shooting on a sitting duck.

The kit is in scale 1:48 and from Merit International (check here) with the engine and forward fuselage from a Classic Airframes kit (check here). I've written a review of the build here.

The Enemy Attack On Midway

Aircraft destroyed on the ground on Midway June 1942 (Discussion)

Previous: The attack on Midway - The 'Val'
Start page
Next: Baptism of fire - The Avenger